This breathtaking Whitney-Kennedy carbine is listed on Dale Olson's serial number list as a .45-60 carbine with a loop lever and ladder rear sight and as 98% (see condition).Only around 1,000 Whitney-Kennedy carbines were manufactured in total in 1880-1886 out of a total production run of an estimated 23,500 rifles and carbines. The 1,000 carbines were further subdivided into large frame and small frame versions in four calibers providing a fair amount of variety in an already scarce model. They are based on a redesign of the 1878 Burgess rifle by Samuel V. Kennedy and Frank W. Tiesing to chamber the popular Winchester .44-40 cartridge. Given this, its is not surprising that Whitney-Kennedy rifles in carbines are most commonly found in .44-40 making those in other calibers particularly rare, and the .45-60 cartridge was not introduced until the E serial number range. In "Lever Action Magazine Rifles Derived from the Patents of Andrew Burgess" by Maxwell, only around 10% of the total Whitney-Kennedy production run is estimated to have been large frame carbines in .45-60. This incredibly high condition carbine has a "barley corn" front sight fitted on top of the barrel just behind the magazine band, "WHITNEYVILLE ARMORY. CT. U.S.A." on top between the barrel band and the adjustable notch and folding ladder rear sight which is graduated out to 900 yards, "45-60" on top at the breech, a saddle ring on the left side of the frame, "PAT'D JAN Y. 7-73./AP._1 (2) MAY 13 & AUG. 12-79" on the upper tang, the serial number on the lower tang, a plain smooth trigger, and crescent buttplate with a takedown cleaning rod inside. Includes a letter of authenticity signed by Tom Selleck confirming this firearm is from his personal collection.

Excellent with 95% plus bright original, high polish blue finish remaining, the vast majority of the original case colors remaining on the hammer including especially vibrant colors along the back, smooth brown patina where the finish has flaked, light scratches, and generally minimal age and storage related wear overall. The wood is very fine and has a glossy oiled finish, distinct grain, slight wear at the edges of the wrist, and a limited number of light dings and scuffs. Mechanically excellent. This incredible carbine is easily one of the finest Whitney-Kennedy carbines extant. Provenance: The Tom Selleck Collection 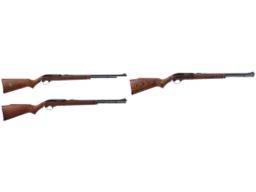 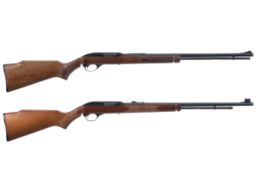 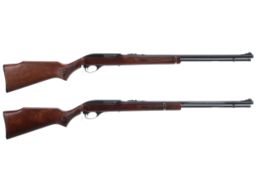 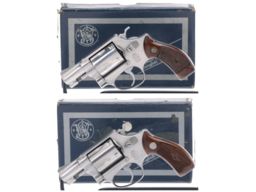 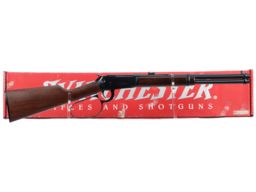 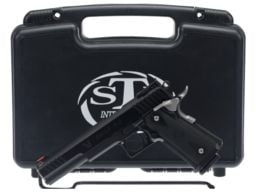