The included Remington factory letter from 1953 states that the factory records show that this rifle (serial number 129909) ordered and sold to Wild West exhibition marksman Frank E. Butler, husband of "Little Sure Shot" Annie Oakley on February 28, 1912. It is widely known that Mr. Butler was in charge of procurement of his wife's firearms, among several other business related roles. Touring the country with his shooting act, Butler was performing in Cincinnati, Ohio, when he met his future wife. Butler placed a $100 bet with Cincinnati hotel owner Jack Frost that Butler could beat any local shooter. Frost arranged a shooting match between Butler and a 15 year old Annie Oakley (born Phoebe Ann Mosey). Butler lost the bet when he missed his 25th shot. The two sharpshooters began a courtship and soon married. In 1882, after Oakley stood in for Butler's sick partner, the couple created their own shooting act and from 1885 to 1901 were a star fixture on Buffalo Bill's Wild West. Oakley became the star attraction, earning more money and international fame than most of the Buffalo Bill performers, and Butler handled the business end of the venture. Outside the partnership, Butler worked as a UMC representative and Remington Arms Co. salesman. Oakley continued to perform after leaving Buffalo Bill's Wild West. She retired from show business in 1913. In her own right, Oakley created the image of the cowgirl and proved without a doubt that when given the opportunity women are as capable as men. The master markswoman could hit the thin edge of a playing card and shoot distant targets while looking into a mirror. She entertained European royalty such as Queen Victoria and even shot a cigarette out of Kaiser Wilhelm II's hand. In another included Remington factory letter from 1993, factory historian J.D. Heath provides more details about the gun's F-grade engraving and concludes that the non-matching serial numbers on the receiver (129999) and tang (129909) was a factory error, likely made by the engraver. In a notarized letter written by Jerald Biddle, the ownership history of this rifle is presented. According to Biddle, Oakley gave the rifle to James Robinson, a newspaper reporter in Dayton and assistant manager of the Amateur Trapshooting Association (ATA). (Note that an included January 14, 1973, newspaper article from the Dayton Daily News corroborates the story.) The rifle was lost in a 1920s poker game to a Lou Brandt who was an ATA member. After Brandt died circa 1953, the rifle was "passed on to Ross Biddle," a close friend of Brandt, a charter member of the ATA and grandfather to Jerald Biddle. Jerald inherited the rifle after Ross died. The top barrel flat on this rifle is marked "MODEL 12-B" followed by the two-line address/patent dates ahead of the rear sight and "22 SHORT" is marked on the upper left barrel flat at the breech. The barrel is equipped with a beach combination front sight and a two leaf folding rear sight. A folding peep sight is mounted on the tang. The receiver has a floral scroll engraving with game scenes on the sides. The panel scene engraving on the left side features a pair of rabbits and the panel scene engraving on the right side features a squirrel in a tree. The initials "RB" are lightly hand inscribed on the left and right sides of the receiver, bottom of the receiver at the rear and on the inside of the receiver. The initials are likely that of Ross Biddle. The rifle is mounted on a highly figured checkered forearm and smooth straight grip stock fitted with a hard rubber serrated factory butt plate.

Fine. The rifle retains 50% original blue finish with the balance thinning to a gray. The wood is also fine with some scattered minor handling marks. The forearm checkering is crisp. Mechanically excellent. A historic and fantastic example of a factory engraved Remington Model 12-B Gallery Rifle documented to "Little Sure Shot" Miss Annie Oakely 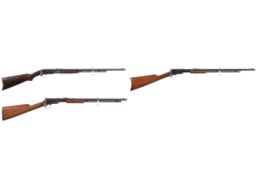 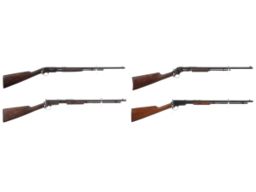 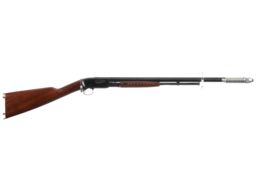 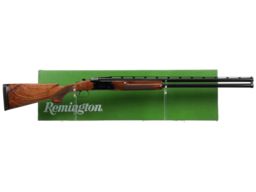 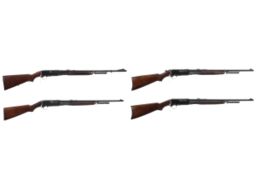 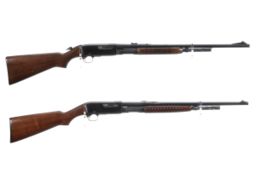