Treasure hunting conjures up images of long hours shifting through historical texts, wild adventures through uncharted, faraway exotic places and backbreaking work with a shovel. The work is daunting, never easy, and always filled with more failures and dead ends than successes. As one famed fictional archaeologist put it, “We do not follow maps to buried treasure, and ‘X’ never, ever, marks the spot.” But then there are the treasures that are found without any effort at all; they just “fall into your lap,” even while in your own “backyard.” The discovery of this revolver falls into the latter category of treasure hunting, just being in the right place at the right time. In the cover article “A Pawn Shop Treasure” published in the summer 2020 issue of Smith & Wesson Collectors Association Journal” (a copy is included), Rick Rossi recalled the serendipitous moment he came across this historic piece of Annie Oakley memorabilia at a local pawn shop. As told by Rossi, this revolver was one of three handguns a gun dealer had traded for a Colt Model 1908 on the same day Rossi walked into the shop. As a collector of S&Ws Rossi just had to have it. The shop owner quoted a price of $350, but accepted Rossi’s counter offer of $300. With the revolver came a leather flap holster. Like he did with all of his S&Ws a factory letter was ordered through the S&W Historical Foundation. Following a three week vacation, Rossi returned home to receive an unexpected phone call from the S&WHF telling him a most joyous surprise: the factory records indicated that the revolver was ordered by Frank Butler for his wife and famed exhibition shooter, Annie Oakley. The accompanying factory letter, confirming the historical significance of the “pawn shop treasure,” arrived soon after at Rossi’s home address. The letter lists the revolver with a 6 inch barrel, Patridge front sight, rear sight to match, blue finish, and checkered walnut gold medallion square butt extension grips when it was shipped on July 22, 1916 and delivered to Frank E. Butler of Cambridge, Maryland. “This is a very important historical handgun,” wrote S&W historian Roy Jinks in the letter. “It was ordered by Mr. Butler for his wife and exhibition shooter Annie Oakley. Mr. Butler ordered all of her revolvers and she was still doing some shooting exhibition. You are very lucky to have such a historical revolver.” Born Phoebe Ann Moses, Annie Oakley (1860-1926) created the image of the cowgirl and proved without a doubt that when given the opportunity women are as capable as men. The master markswoman could hit the thin edge of a playing card and shoot distant targets while looking into a mirror. She entertained European royalty such as Queen Victoria and supposedly even shot a cigarette out of Kaiser Wilhelm II's hand. Oakley and her husband, Frank Butler, a master marksman in his own right, joined the famed Buffalo Bill's Wild West Show. Sitting Bull, after seeing one of her shows, was so amazed by Oakley's marksmanship that he gave her the nickname "Little Miss Sureshot." Although Annie and Frank officially retired from the professional show arena in 1913, the couple continued to give shooting exhibitions and make charity appearances. She continued to set shooting records well into her sixties before here health began to decline in 1925. As fate would have it, she and her husband died within three weeks of each other in November 1926. Thanks to Hollywood and Western pulps, the legend of Annie Oakley endures to this day. The revolver had period modifications, presumably made for Annie Oakley while she used it for her trick shots. The front strap has a filled hole where two digits of the serial number have been remarked, a telltale sign that the revolver once had a grip adaptor. Finally, there are four holes drilled on the bottom of the grips, likely provisions for a buttcap. If only this gun could talk! These aftermarket additions only add to its one-of-a-kind character as a historic piece from Annie Oakley’s personal firearms collection. It does not take much of an imagination to see “Little Miss Sureshot" firing trick shots with this revolver. In fact, a photograph of Oakley used in Rossi’s article clearly shows her handling a S&W .22/32 Hand Ejector revolver. The revolver has target sights, standard S&W markings, and matching serial number “229827” on the front strap, cylinder and barrel. The leather flap holster that Rossi purchased with the gun is stamped “5/HRSP” on the back. Comes with ten contemporary Annie Oakley related souvenir postcards and a mini Annie Oakley biography written by the Darke County Historical Society.

Very fine, retaining 90% original blue finish with speckling of brown and edge and side muzzle wear on the balance. There is some flash pitting on the frame and front cylinder face. 95% plus original case colors remain on the hammer and trigger. The grips are fine with some minor dings and crisp checkering overall. Mechanically excellent. The holster shows the well worn character of a well used accoutrement with the overall stitching remaining tight. A great documented piece of exhibition shooting from a bygone era, that once belonged to internationally famed sharpshooter Annie Oakley. It is not often that we catalog historic firearms owned by the great Western legends! 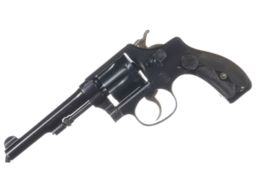 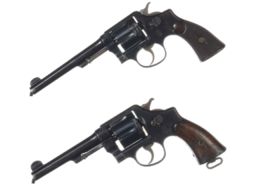 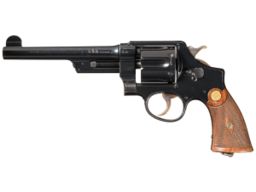 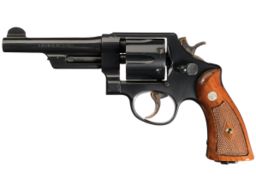 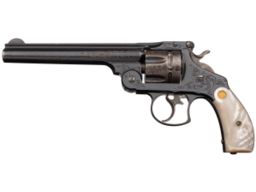 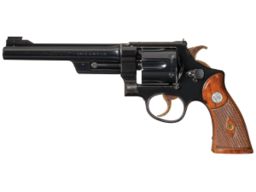