The Webley-Fosbery revolvers built based on designs by Lt. Col. G. V. Fosbery are among the rarest and most interesting of all revolvers and are some of the few "automatic" revolver designs. Less than 5,000 of the revolvers split across multiple variations were manufactured before production ended in 1924. This is a Model 1902 variant. Like all Fosberys, it utilizes a novel "automatic" mechanism. It is a true revolver with cartridges held in a rotating six shot cylinder, but the cylinder is turned by recoil: the top section of the revolver shifts backwards, cocks the hammer, and prepares the next chamber utilizing a spur in the top strap and zig-zag grooves on the cylinder. This mechanism allows for faster firing while maintaining the low trigger pull of a single action revolver. The Fosbery design was reported to have been as fast if not faster than its magazine fed semi-automatic counterparts and as fast to load if a speed loader was used and is known to have been purchased by British military officers and to have been used during both world wars. It has an octagon barrel with a solid rib and a blade front sight, and the rear sight is integral to the top strap latch. The top strap is marked "WEBLEY·FOSBERY" on the left. The left side of the frame is marked with the "winged bullet/W&S" trademark followed by "455 CORDITE", and the right side has the serial number. The serial number is also lightly hand marked on the grips and is stamped on some of the components including the rear face of the cylinder (partial).

Exceptionally fine with 85% plus original blue finish, fading at the edges and the grip straps to a smooth gray-brown patina, some minor spotting, and generally minor overall wear such as some light scratches and marks. The grips are excellent and have crisp checkering, aged tones, and some scratches on top right panel. Mechanically excellent. The Webley-Fosbery is one of the most unusual and difficult to find revolvers. It represents the transitional period from the dominance of revolvers in the 19th century to the emerging dominance of semi-automatic pistols in the 20th century. 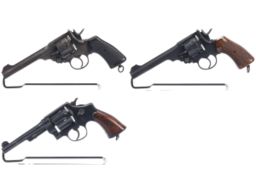 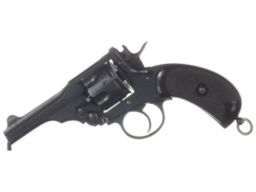 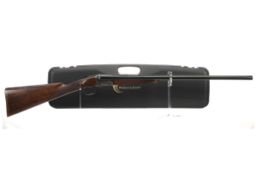 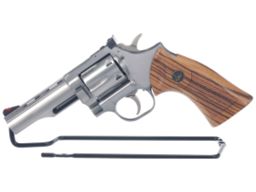 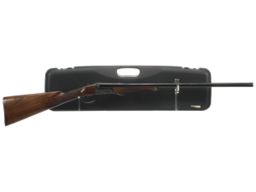 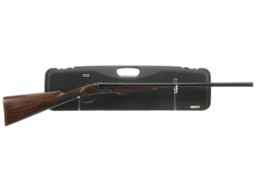