Self-described as an “American multinational luxury jewelry and specialty retailer,” Tiffany & Co. created some the most spectacular and expensive highly embellished deluxe handguns and rifles from the late 1880s to the early 1900s for American’s leading firearms manufacturers including Colt, Winchester and most notably Smith & Wesson. Often intended to be showpieces for the World's Columbian Expedition of 1893, such as this example, the Exposition Universelle in Paris of 1900 and the Pan-American Exposition in Buffalo, NY in 1901, these highly stylized arms fully embodied the classic Art Nouveau style, as clearly demonstrated on this S&W revolver. “Revolvers of the most improved types, mounted in silver, carved ivory, gold, etc. with rich and elaborate decorations,” proclaimed the Tiffany Blue Book catalog, would set a customer back $50.00 to $300.00. Although the number of surviving Tiffany S&Ws remains unknown, they are arguably the rarest and most desirable of the late 19th century American high art firearms. The largest public display of Tiffany embellished 19th century arms can be viewed at the Metropolitan Museum of Art in Gallery 372. The lion’s share of the display was donated and/or sold by Dr. Gerald Klaz. As stated in the accompanying factory letter, S&W historian Roy Jinks is of the "opinion that this revolver was decorated by Tiffany & Co. for the factory to use in one of their special displays." In fact, this Tiffany masterpiece was exhibited at the 1893 World's Columbian Exposition in Chicago as confirmed in S&W’s period publication “Description and Prices of Finely Decorated Revolvers Prepared for World’s Fair at Chicago, 1893.” Among the 5 page list of the numerous S&Ws displayed at the 1893 Chicago World’s Fair S&Ws, this revolver is described as “1 Single Action Revolver, 32 caliber, in heavy silver repousse work, female figures with scroll work of flowers, No. 94759.” At a price of $200, the revolver tied for the fourth most expensive S&W piece exhibited at the 1893 World’s Fair. The other $200 priced revolver was a .38 DA with “copper and silver, inlaid on iron, No. 284641.” The revolver is pictured in John Parsons’ “Smith & Wesson Revolvers: The Pioneer Single Action Models” on page 142. The sterling silver Tiffany grip covers the frame and recoil shield and features a masterful Rococo style floral blossom pattern along with a fantastic depiction in relief of the three Muses from ancient Greek mythology. The barrel and cylinder have an etched floral scroll pattern on a matte etched background. Even the front sight is embellished. The grip is signed "TIFFANY & CO./STERLING" over the letter “T”, a letter marking Tiffany used from 1891 to 1902, just behind the trigger guard. Tiffany marked each piece they made on special order. The frame serial number is not visible. The serial number “94759” is marked on the cylinder, barrel and barrel latch. The barrel and cylinder are plated in nickel.

Excellent as highly embellished by the renowned Tiffany & Co., retaining 99% plus original nickel plating showing some minor handling marks. 98% original case colors remain on the hammer. The grip is in equal condition with crisp patterns. Mechanically excellent. A true Tiffany masterpiece showcased at the 1893 World's Columbian Exposition in Chicago worthy of the finest public or private collections. Tiffany & Co. S&Ws are some the rarest high art firearms in existence with some on display at the prestigious Metropolitan Museum of Art. Don't let this one slip away as it is a must have for the serious S&W or firearms art collector! Provenance: Dr. Gerald Klaz collection. 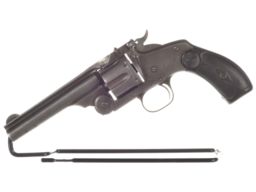 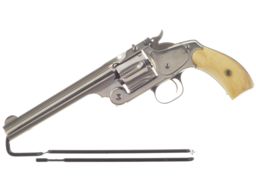 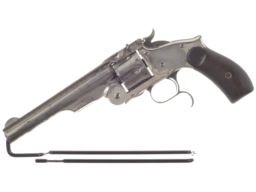 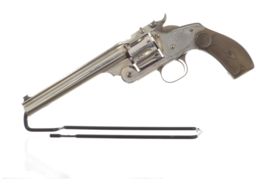 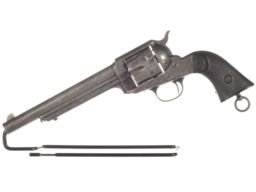 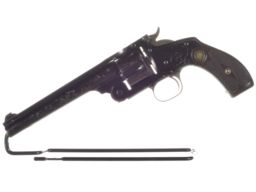