Manufactured from 1870 to 1872, the First Model American was the first top break, automatic ejecting revolver. This revolver also has the distinguishment of being one of the 1,000 manufactured for the U.S. Government, with blue finish. Interesting enough, this model was introduced 3 years before the Colt Single Action Army revolver and is probably, more than any other model, associated with the historic American West. The American Revolver was the first cartridge revolver adopted by the U.S. military and saw usage throughout the Indian Wars as it was reported to have been issued to the 2nd, 3rd, 4th, 5th, 6th, and 7th Cavalry. This rare and desirable U.S. martial revolver is listed by its serial number in the STANDARD CATALOG OF SMITH & WESSON by Jim Supica & Richard Nahas as a Model 3 that was purchased by the U.S. government (page 92).Like all government contract firearms these were subject to military acceptance inspection which was a task assigned to Orville W. Ainsworth, one of the rarest and most collected inspectors of Colt Model 1873 Single Action Cavalry Revolvers and bear his distinctive "A" acceptance proof. The top of the barrel rib has the one-line address and patent dates marking followed by "US" at the breech. The cylinder has a small letter "P" and small letter "A" on two flutes. The letter "A" repeated on the left side of the top strap and left side of the frame ahead of the trigger guard, and the letter "P" repeated on the right side of the barrel forward of the hinge. A faint script letter cartouche is stamped on the left grip panel. The right grip panel is numbered to the gun. Matching assembly marks are on the grip frame, cylinder, barrel and barrel latch.

Fine. The frame retains 60% original blue finish and the barrel and cylinder retain traces of original blue with the balance a smooth brown-gray patina mixed with a few scattered small patches of light pitting. Ainsworth's "A" inspector marks are clear. Some original case colors remain on the hammer, and patterns of original case colors remain on the trigger guard. The grips are also fine with period holster type high edge wear and a series of in the field hammer-like dings on the bottom. Mechanically excellent. No U.S. martial collection can be complete without a S&W Model 3 American. Model 3 Americans saw hard use in the field, and can be difficult to find in any condition. This well above average example will fill the vacant slot in your Indian Wars or martial handgun collection very nicely! 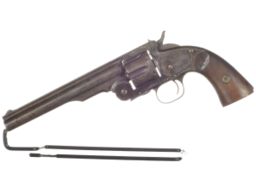 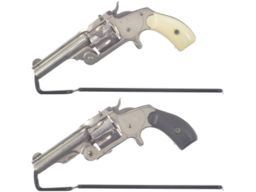 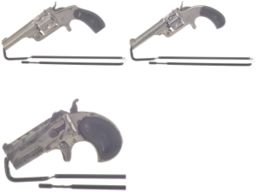 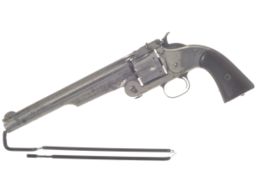 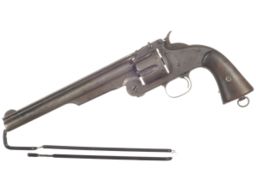 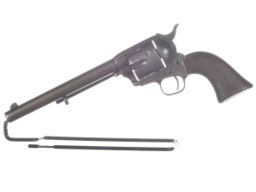