Operating in Seattle in the 1980's, Detonics reportedly only built 1800 full-size pistols. This Scoremaster was specially built for actor Tom Selleck. Selleck's career on both television and film began with Pepsi ads in the late sixties. From there he would go on playing smaller roles in movies, as well as doing more ads for various products. His success began to pick up when he began being cast in western movies, a role he found interesting because of his firearms collecting, alongside other actors such as Sam Elliot, Glenn Ford, and Ben Johnson. Selleck would have been in the height of his career, starring as Thomas Magnum on Magnum P.I., at the time this handgun was built. This Scoremaster is stylistically similar to the Colt Series 70 used by Selleck on Magnum P.I. The left side of the slide has the standard "Scoremaster/ DETONICS MFG CORP" marking with Scoremaster in a script font. The right side of the slide is specially marked, "451DETONICS MAGNUM P.I./ CUSTOM BUILT FOR/ Tom Selleck". The right side of the frame is marked with the typical "DETONICS .45/ SEATTLE. WA." as well as the custom serial number "TWS001" using Selleck's initials for the letters. This pistol has Pachmayer Signature Model wrap around rubber grips, a checkered rubber mainspring housing, and a rubber coated Pachmayer grip safety. With hardcase, two extra magazines, an extra .451 Detonics Magnum barrel numbered to the gun, and a 50 count box of .451 Detonics Magnum hollow point ammunition. Includes a letter of authenticity signed by Tom Selleck confirming it is from his personal collection.

Excellent, with minimal minor handling marks, a small patch of light oxidation on the back of the hammer spur, crisp grip and mainspring housing checkering, and crisp lettering. Mechanically excellent. This is a truly once in a lifetime opportunity to own a Rare Detonics Scoremaster made specifically for Tom Selleck! Provenance: The Tom Selleck Collection 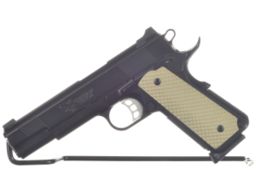 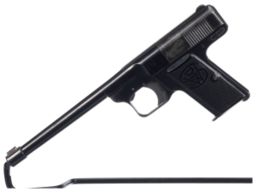 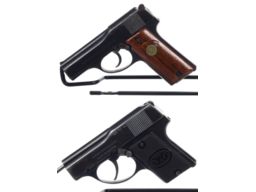 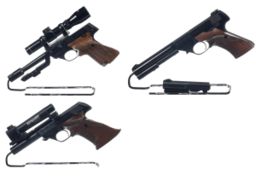 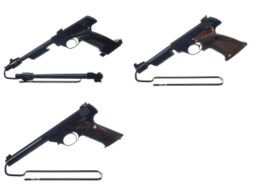 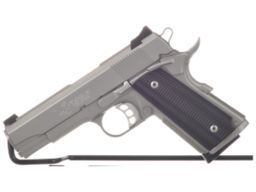