This Colt Model 1911 Special Army semi-automatic pistol was manufactured in 1910 for the Ordnance trials of the Colt and Savage automatic pistols conducted on March 15, 1911 at Springfield Armory. The Model 1911 Special Army incorporated improvements designed to address problems that surfaced in the Model 1910 Special Army during the November 1910 pistol trials conducted at Springfield Armory. The March 1911 pistol trials resulted in the selection of the Colt Model 1911 as the standard Army handgun. Colt assembled only fifteen Special Army pistols for the 1911 Springfield trials; Serial No. 1-6 were completed in February 1911 in time for the test. Serial No. 7-15 were completed following the trials. This pistol, Serial No. 9, was designated for presentation to the Secretary of War J. M. Dickinson, who signed the final approval of the pistol. On May 12, 1911 pistols 7, 8, and 9 were returned to Colt and fitted with modified hammers. Secretary of War Dickinson declined the new pistol. No reason for this decline is specified but the initial presentations are covered in detail on p. 114-115 of "U.S. Military Automatic Pistols 1894-1920" by Ellis/Meadows and on p. 115 of "The Government Models: The Development of the Colt Model of 1911" by Goddard. Special Army serial No. 9 was subsequently sold to Colt's New York Office Manager Albert Foster Jr., on July 14, 1911. This pistol has the Colt commercial blue finish on the slide and frame with niter blue rear sight, ejector, slide stop, safety lock, hammer, trigger, magazine catch lock and stock screws. The pistol serial number "9" is stamped: (1) on the left side of the frame in front of the slide stop hole, (2) on the inside of the slide in front of the barrel lug cuts and (3) on the matching serialized bottom of the barrel in front of the lug. An "N" is stamped on the rear face of the lug. The pistol is fitted with the Model 1911 short, wide spur hammer that was installed when the pistol was returned to Colt in May 1911. The slide stop and safety lock are hand knurled with bordered knurling. The recoil spring plug lacks the punched hole found on most Model 1911 pistols. The walnut stocks are checkered with small diamond escutcheons around the screws. The pistol has a Type I, blued, lanyard loop magazine with exposed base plate. The left side of the slide is roll-stamped with the two-line patent marking: "PATENTED/APR.20.1897.SEPT.9.1902.DEC.19.1905." followed by "COLT'S PT. F.A. MFG. CO./HARTFORD, CT. U.S.A." ahead of the slide serrations. The encircled Rampant Colt trademark is roll-stamped behind the slide serrations. The right side of the slide is roll-stamped: "AUTOMATIC COLT/CALIBRE 45 RIMLESS SMOKELESS" in two lines.

Exceptionally fine. This ultra-rare and historic Colt Model 1911 Special Army pistol retains all of the original components. The slide has 85% of the bright original high polish blue with moderate finish wear on the left side near the muzzle and around the edges of the ejection port. The top of the slide shows scattered light handling marks; nearly all of the high polish blue is present on the sides and rear of the slide. The markings on both sides of the slide are crisp. The frame retains 40% original blue, mostly on the forward portion, and shows more wear than the slide. The high polish blue on the frame has faded to a smooth blue-gray on the grip strap and the sides of the frame behind the trigger guard. Most of the commercial blue finish is present on the underside of the frame, mainspring housing and grip safety. The rear sight, trigger, side stop, safety lock and hammer have 80% of the delicate fire blue finish. Traces of fire blue are visible on the stock screws and magazine lock. The barrel has 85% of the high polish blue finish. The blue finish on the Type I magazine has faded to a mottled gray-brown patina. Small amounts of bright blue remain on the follower and bottom of the floorplate. The stocks are in very fine condition with flattened checkering and rounded lower edges. The Colt Model 1911 Special Army pistols bested the Savage Automatic pistols in the 1911 Springfield Armory trials. These trials led to the adoption of the Colt Model 1911 pistol as the standard Army handgun. The Model 1911 served the U.S. military with distinction for nearly 80 years and is widely considered to be the best military handgun ever issued. This rare, historic and well-documented Colt Model 1911 Special Army pistol is one of the most significant variations of the Colt Model 1911 extant. It deserves a place in the finest collection of U.S. martial or Colt firearms. 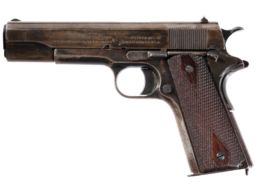 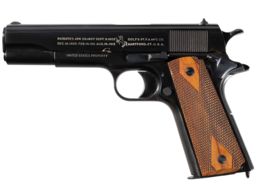 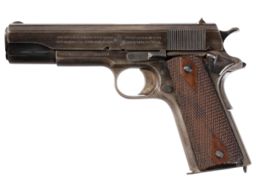 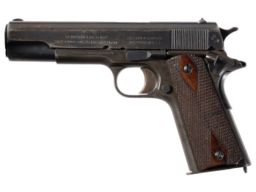 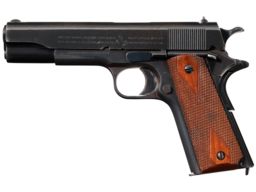 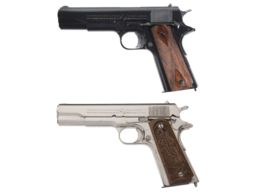