Western pioneer Granville Stuart's own love of firearms has left us with this rifle and a selection of other rare firearms he used in the West. They were brought back together by the diligent efforts of the late well-known Montana collector John Fox, and each has its own story to tell. This rifle is one of the earliest from the collection and is certainly appropriate for a pioneer in Montana in the early 1870s when the buffalo still roamed the plains and were popular quarry. The factory letter indicates this rifle was invoiced on August 27, 1872, to legendary Montana pioneer Granville Stuart of Deer Lodge as a .50 caliber "Sporting Octagon Rifle" with a single trigger, open sights, and oil finished stocks. A copy of Stuart's order for the rifle 10 days earlier is included. He specified that he wanted: "1 Sharps Metallic Cartridge Sporting Rifle. 26 in Octagon Barrel .500-100 Calibre, Oil Stock. Open sights. Single Trigger." The rifle is pictured on page 173 of "Sharps Firearms: Early Metallic Cartridge Firearms and Model 1874 Sporting Rifles." Stuart may have fitted the set triggers and peep sights himself in Deer Lodge given one of his early businesses was a gunsmithing and blacksmithing shop opened in the 1860s. He clearly favored this setup given the presence of double set triggers and peep sights on his other Sharps rifles. He wrote to Sharps discussing various optional parts for his Sharps rifles including globe and peep sights. Granville Stuart (1834-1918) was an important leading figure in the Montana Territory in the second half of the 19th century and was so crucial to the territory's history that he is known as "Mr. Montana." His adventurous life is detailed in multiple period and modern sources such as "As Big as the West: The Pioneer Life of Granville Stuart" by Milner and O'Connor, "Encyclopedia of Frontier Biography" by Thrapp, "Gang Crackdown: When Stuart’s Stranglers Raided the Rustlers" by DeArment in "Wild West Magazine," and "Granville Stuart: Gentleman Vigilante" by Boardman in "True West." He was born in Virginia, grew up in Muscatine County, Iowa, not far from our facilities, where he learned to shoot and hunt, and then headed to the West as a teenage with his older brother James to search for gold in California. Their father had previously headed to California with the '49ers. Misfortune turned to fortune when the Stuart brothers were forced to change their plans to return home to Iowa due to the Mormon War and disease. Instead of Iowa, the ended up in Montana, then still part of the Oregon Territory, and became crucial figures in the Montana gold rushes and the settlement of the region. Throughout his life he held a variety of local political and business positions and also served as Minister Plenipotentiary to Uruguay and Paraguay under President Grover Cleveland later in his life. His first wife was a Shoshone woman, but he was also involved in multiple battles with Native Americans. He was also a member of the vigilante groups in Montana and led the Stuart's Stranglers in the mid-1880s when they cracked down on accused/suspected criminals with classic nicknames like Rattlesnake Jake. The Stranglers were particularly focused on horse thieves and cattle rustlers and either killed them in shootouts, burned them, or hung them. Theodore Roosevelt was a rancher in the area and wanted to join, but Stuart declined out of concern for Roosevelt's youth and fears that his name would get their secretive activities unwanted attention. Roosevelt and others credited the Stranglers with killing 60 or more men suspected of horse theft and cattle rustling. These activities boosted rather than hurt Stuart's local and national esteem and led to many considering him a western hero. He is known to have ordered many firearms, including multiple other Sharps rifles from the John Fox collection. Sharps were popular in the West as they could handle the local wildlife and two-legged threat and were particular renowned for their accuracy over long ranges. This rifle definitely looks like a frontier firearm; in fact, it closely resembles the earlier percussion Plains Rifles and features a rib with ferrules under the barrel, a cleaning rod, entry pipe and pewter cap on the forearm, period custom double set triggers, a swept cheek piece on the buttstock, and crescent rifle buttplate. The blade front sight and modified Lawrence patent rear sight are also similar to those found on earlier muzzle loaders. The top of the barrel is marked with the two-line Hartford address ahead of the rear sight and "CALIBRE 50 26" at the breech, and the bottom has the matching serial number.

Very good as period modified with 60% faded original blue finish on the barrel, traces of original case colors, gray and brown patina on most of the balance, one absent ferrule, replaced hammer, mild oxidation, and moderate overall wear. The wood is fair and has stabilized cracks in the wrist, cracks and slivers absent from the forearm, and moderate scrapes and dings on the buttstock. Mechanically fine. This is a rare western Sharps confirmed to have been shipped to and ordered by a genuine legend of the West. The rifle's scars and genuine period modifications are part of its colorful history and its legacy and certainly add to its frontier appeal. Provenance: The John Fox Collection. 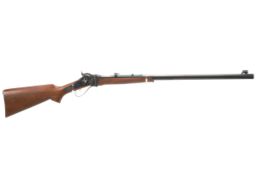 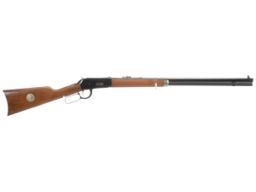 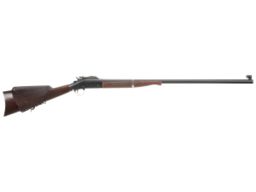 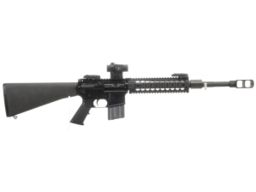 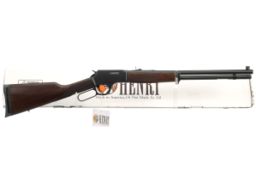 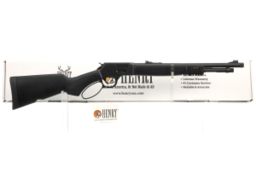