Offered here is a true Elvis Presley owned artifact, a S&W Model 36 revolver. In his personal life Elvis had a well-documented interest in firearms. When he died in 1977, The King was reported to own 37 firearms, including one machine gun. In the accompanying July 1978 letter on Mid-South Police Supply, Inc. of Memphis, Tennessee, letterhead, Charles R. Church states “Mr. Elvis Presley did purchase from this company a Smith & Wesson Chief Special, Serial Number 6J3114, and that he personally signed for the weapon and it was personally delivered to him by [Charles Church]. This gun was purchased by Elvis on June 7, 1971 from us at our store at 3608 Lamar. He purchased several other pistols at this particular time. The gun was paid by a check drawn on the account of Elvis Presley, Incorporated and the purchase of this weapon by Mr. Elvis Presley is documented in our Federal Firearms record book. Also, this purchase is documented by a copy in the Federal Firearms Transaction Record 4473 and an attachment which is also in the Federal Firearms files.” The Federal Firearms Transaction Record 4473 and the attachment referenced by Church are included. The 4473 form shows that the correct purchase date was January 7, 1971, not June 7, 1971 as stated in Church’s letter, and the attachment lists this revolver by serial number along with five other S&Ws. Elvis later had the revolver engraved with his TCB logo on the side plate. TCB stood for “Taking Care of Business” that was Elvis’ personal motto. The lightning bolt that accompanied the acronym represented “in a flash.” The TCB Band was Presley’s band from 1969 until his death in 1977. The formation of the band followed Presley’s triumphant return to the stage as established by his acclaimed television comeback special, “Elvis,” that aired on NBC. The original TCB Band members were James Burton (lead guitar), Jerry Scheff (bass), John Wilkinson (rhythm guitar), Larry Muhoberac (keyboards) and Ron Tutt (drums). The band’s first live appearance occurred on July 31, 1969 at the International Hotel (now known as the Westgate Las Vegas) in Las Vegas where the band did an extended concert residency of 638 shows with every show sold out from 1969 until his untimely death at age 42 on August 16, 1977. While staying at the International Hotel, Presley shot a television set in a fit of rage during the airing of "The Mike Douglas Show" when singer Robert Goulet was a guest. The purported TV set has been displayed at Graceland, and, while not independently verified, this revolver per the consignor was reportedly the revolver Presley used to shoot the TV. In “Disgraceland: Musicians Getting Away with Murder and Behaving Very Badly” author Jake Brennan identifies the revolver used in the infamous hotel TV incident as a “.38-caliber Smith & Wesson—the one with the TCB logo and lightning bolt on the pistol grip.” Nevertheless, this revolver remains a well-documented Elvis Presley personally owned S&W. By the late 1970s Willie Wynn, former tenor singer of the Oak Ridge Boys, had possession of the revolver and as stated in the included 1980 Willie Wynn’s statement, Elvis and Hollywood Legends Museum owner Mike Moon purchased the revolver from Wynn in May 1980. As identified in the accompanying 2017 Hollywood Legends Museum certificate of authenticity, the revolver was part of the Mike Moon collection for over 35 years and during those years had been on display at the Elvis Presley Museums that operated from 1981 to 2016 with the primarily location in Pigeon Forge, Tennessee. A final included document states the Moon collection, which included this revolver, was purchased by Chris Davidson in the summer of 2018.

Very fine, retaining 85% original blue finish with light spotting mostly on the grip straps. The TCB logo is crisp. 95% original case colors remain on the hammer and trigger. The grips are fine with minor handling marks and crisp checkering overall. Mechanically excellent. An interesting piece of Elvis memorabilia with well established provenance that will make a great addition to any Elvis or S&W collection. 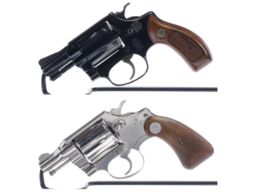 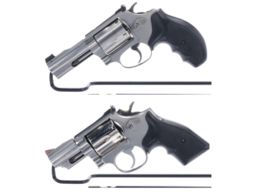 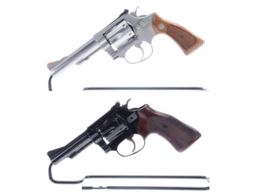 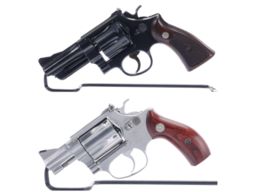 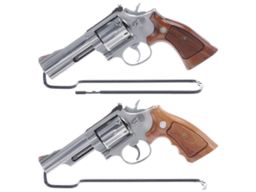 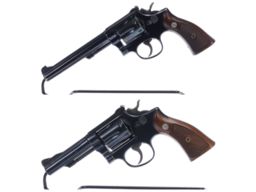