American shooters have a tradition of winning in international and Olympic competitions and have won more Olympic shooting medals than any other country. Yet most countries throw massive amounts of government funding at national team development and Olympic athletes. This is not the case in the USA. Funds appropriated by the US Olympic and Paralympic Committee are lean. USA Shooting, the National Governing Body for Olympic and Paralympic Shooting Sports, is funded almost exclusively through donations and meager sponsorship dollars. Our American shooting athletes need your help! These are world-class athletes who stand for the National anthem and are proud to do so. You are not only buying a world class shotgun and a once in a life time experience, you are supporting the Olympic dream. 100% of this donation is going to the USA Shooting Team. Along with the K-80 Shotgun you will also have the opportunity to spend a day on the range with Olympian Corey Cogdell-Unrein. Date and time TBD with the successful bidder. Location is flexible but ideally at USA Shooting headquarters in Colorado Springs, Co. Alaskan native Corey Cogdell-Unrein is a three-time Olympian (2008, 2012 and 2016) and a two-time Olympic medalist winning bronze medals in Women's Trap at the Beijing 2008 and Rio 2016 Summer Games. She competed in the Olympic Games with a K-80 shotgun made by Krieghoff. When she earned her bronze medal in Beijing, she had been performing at top level competition for just two years, and the win made her the first woman in the United States to medal in Women’s Trap. The sport of competition shooting seemed to come natural to Corey who grew up hunting and fishing in Alaska. She made the National Development Team in 2006 by placing first in the junior women’s trap competition and on that same day made the National Team with a score that placed her in third. At her international competition debut at the 2007 Changwon World Cup, she took bronze. In 2013, she tied the world record for a perfect score of 75/75 to become the second woman to accomplish that feat. During a 2019 interview, Corey was asked how many shotgun shells she goes through in a year. “I usually go through about 30,000-50,000 rounds,” she replied with a laugh. Corey’s achievements include being an 8-time World Cup medalist. She is a member of the Whitetail Deer Education Foundation, Wild Sheep Foundation, Safari Club International and Team for Tomorrow, is a product ambassador for Federal Ammunition, a Krieghoff Pro Staff Member, and the first shooter to be inducted into the Alaska Sports Hall of Fame. Manufactured in 2019. Blued steel barrels with dual bead sights on the raised matted competition style vent rib, standard Krieghoff markings, 76 mm (3 inch) chambers with ejectors, and interchangeable choke tube system (skeet/improved cylinder installed). The barrels are numbered "A25349". Nickel finished action with standard light scroll engraving, standard markings, single selective trigger, and manual tang mounted safety. Nicely figured, multi-point checkered walnut forend with engraved fittings, Deeley style latch, and Schnabel tip and pistol grip stock with adjustable comb and rubber recoil pad. Included with the gun is a factory case with snap cap, cleaning tools, stock removal tool, and three extra chokes (light modified, modified, and improved modified) as well as an SKB hard case with USA Shooting label on the lid. Barrel and stock measurements (U/O): bore diameter 9 inches from the breech both marked 18.6 mm (.732 inches) and measured .734/.733 inches; minimum wall thickness .041/.042 inches; 1 9/16 inch drop at comb; 2 11/16 inch drop at heel; 14 5/8 inch length of pull; weight 7 lbs. 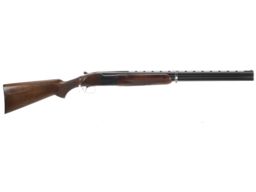 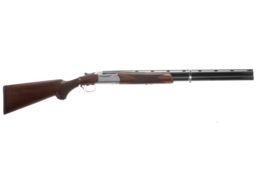 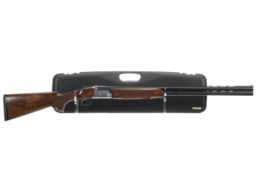 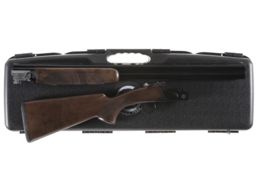 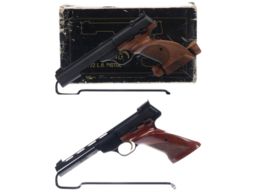 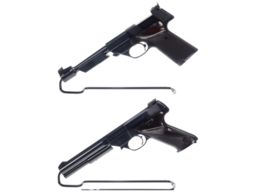