Offered here is an exceptional factory documented masterpiece of the most iconic 19th century American firearm by Colt's longest tenured Master Engraver Cuno Helfricht. It's combination of rarity, condition, configuration and pedigree put it into the rarified category of not good nor great but utterly exceptional. The accompanying factory letter confirms the 4 ¾ inch barrel in .44-40 caliber, two-tone finish (“nickel with gold cylinder”), pearl grips and engraving and states the revolver was shipped to J.F. Schmelzer & Sons of Kansas City on January 29, 1889. The revolver is pictured in Graham, Kopec and Moore’s “A Study of the Colt Single Action Army Revolver” on page XXII. The authors attribute the engraving to famed Colt Master Engraver Cuno Helfricht or his shop and the pearl stocks with incised and enameled American eagle as factory original. Helfricht spent his nearly 50 year career exclusively with the Colt firm (1871-1921). During his tenure with Colt, Helfricht saw the transition from percussion to cartridge firearms and a rapidly growing market for engraved firearms. At the height of the firearm engraving fad, Helfricht oversaw a shop of six engravers. By the turn of the century, experts believe that Helfricht did most of the work himself with the help from one to two assistants. Helfricht's successor's included famed Colt engravers Wilbur Glahn and William Gough. Using the most liberal statistics only 2,500 1st Generation Colt SAAs of the 357,800 manufactured were factory engraved, and the overwhelming majority of those 2,500 were done in the twilight years of production. Thus, an emphasis must be placed on the rarity of factory documented black powder single actions. Yet even fewer of those remain in high condition, like this incredible piece. In the chapter devoted to engraved SAAs in the seminal work “A Study of the Colt Single Action Army Revolver” the authors lay out statistics that without a doubt make this SAA a true rarity in Colt collecting, a standout piece to even the most advanced public or private collections. Out of the engraved 1st Generations surveyed approximately 15% were chambered in .44 WCF (the vast majority, 65%, where in .45 caliber) and 4% had a combination of gold and nickel plating. As already mentioned, the grips are pearl and feature an incised American eagle on the left panel. Colt historian and author R.L. Wilson noted only "a few" SAAs left the factory with embellished grips, the embellishment was generally a carved steer head, and those of pearl are especially rare. The rarity of this SAA cannot be overstated. The left side of the barrel has the acid etched “COLT FRONTIER SIX SHOOTER” panel. As noted in “A Study of the Colt Single Action Army Revolver,” the barrel etching “is in nearly as fine a condition as the day it left the factory.” This highly desirable etched barrel panel was officially replaced by the Colt factory in the 120,000 serial number range with the much easier to produce and larger roll-stamping. Rarely is the etched panel encountered in such pristine condition. We currently know of four other factory engraved SAAs with the Frontier Six Shooter etched panel (nos. 47135, 52438, 56304 and 53117). No. 47135 was engraved by Eugene Young. Known as the Rosebud SAA, no. 52438 was owned by a U.S. Indian Service superintendent at the Rosebud Indian Agency. Nos. 53117 and 56304 are in private hands. No. 56304 has the additional significance of being presentation inscribed to one of Billy the Kid’s captors, Frank Stewart. The top of the barrel is stamped with the two-line Hartford address. The left side of the frame has the standard three date, three-line patent marking. The left side of the trigger guard is stamped “44 CAL.” Matching serial numbers are on the frame, trigger guard and back strap. The trigger guard serial number is inside an engraved banner. Provenance: The Ray Vanyek Collection, property of a gentleman

An excellent Colt masterpiece by arguably their finest in-house engraver, Cuno Helfricht. The cylinder retains 97% original gold plating and the remaining surfaces retain 95% original nickel plating with some scattered minor flaking. The engraving is crisp. The etched barrel panel is excellent. The grips are excellent with a small surface chip near the bottom (right panel), most of the original enamel remaining, and attractive fiery colors. A true rarity in American arms collecting, this high condition, factory documented, factory engraved and nickel and gold plated SAA will be a standout piece in any advanced public or private collection. An exceptional work of late 19th century Colt artistry! 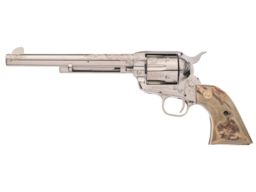 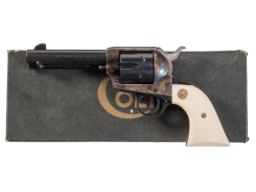 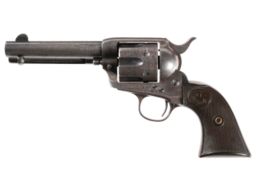 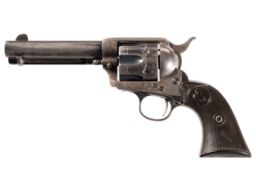 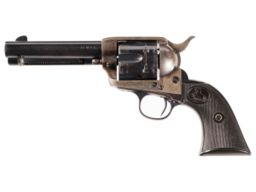 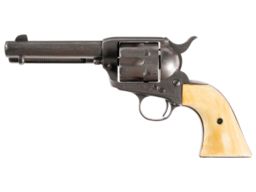