The Hotchkiss revolving cannons were Gatling inspired artillery pieces invented in 1872 by Benjamin B. Hotchkiss. Versions were designed for field and naval use in 37 mm, 47 mm, and 53 mm. The 37 mm bore on this example dwarfs the .45 and .30 caliber rounds typically loaded into the Gatling. The original 16 ounce 37 mm cartridges were designed because exploding projectiles that weighed under 14 ounces were prohibited from use because they were deemed "inhumane". Using a five barrel cluster, the Hotchkiss is fed with gravity driven magazines, which would be replaced by a gunner's assistant while the gunner operated the elevation and traverse knobs, and kept the main crank running. They were used by several countries throughout the world, including the U.S., France, and Russia, and had an impressive range of over four miles (considered accurate to a mile). A well experienced crew was capable of firing 43 rounds a minute. A 37 mm Hotchkiss field gun is known to have been used by the U.S. Army during the Indian Wars including during the Ute Uprising in Colorado in 1879. Others were used during the Spanish-American War by both sides. Hotchkiss naval revolving cannons continued to be used even into WWI primarily as defensive weapons used by larger vessels against torpedo boats. This example has U.S. Navy markings on top of the receiver: “U.S.N./[anchor]/No-44 37 m/m/495 LBS-.” The breech has the Pratt & Whitney marking (faint). Pratt & Whitney started to manufacture the Hotchkiss revolving cannon for the U.S. Navy in 1888. The trunnion is marked “CAL-1.457/1889” (right) and “WWK” (left). Each barrel is numbered on the collar 1 through 5. Attached to the cannon is a leather faced wooden shoulder stock. The cannon is mounted on a rolling 1968 dated Boeing Vertol balancing propeller stand. Included are two shell casings and 30 projectiles. Provenance: Firearms for Freedom Collection 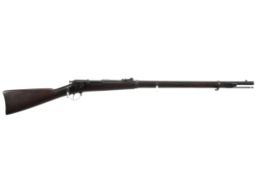 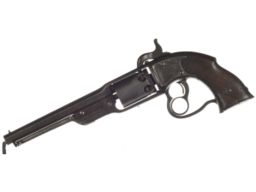 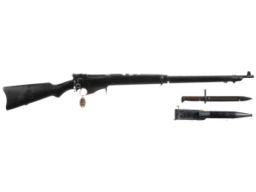 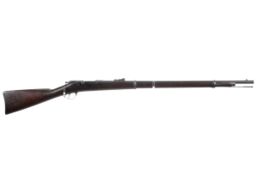 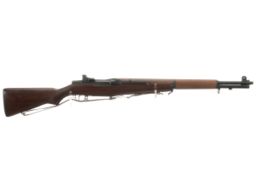 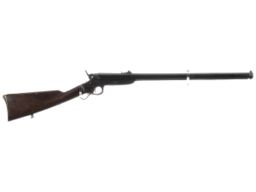