This particular Samuel Colt presentation revolver is inscribed and cased and has the rarest style of factory inscription. Colt firearms have long been symbolic of quality and excellence in the field of weaponry. Before the Colt revolver was universally accepted as the most desirable weapon, Samuel Colt presented gifts of inscribed and cased Colt revolvers to high ranking government officials, important military officers and heads of state. These gifts gave Colt promotional "mileage" in building his empire. Colt dispatched agents around the country and abroad to sell and promote Colt firearms. He also contracted dealers to market his products for him. This factory cased Colt Model 1849 Pocket Revolver was presented by Samuel Colt to an early agent and wholesaler of Colt firearms in New York City in the late 1850s and is inscribed on its back strap: "Presented to G.W. Dart by Col. Saml. Colt". Colt expert R. L. Wilson states that this style of inscription is considered to be among the rarest of personal Colt inscriptions. The full serial number is stamped on the barrel, frame, trigger guard, back strap and cylinder. The loading lever is stamped with the proper partial serial number "0095". The case contains a "COLTS/PATENT" marked two cavity brass bullet mold, double face eagle powder flask, Eley Brothers cap tin, case key and a few lead balls. The bottom of the case is marked: "WM. Sloane 593 Broadway/NY". This revolver is pictured and identified in the included July 1969 issue of "The Texas Gun Collector" on page 20, Tom LoPiano, Jr.'s article "From Wholesaler to Horsetrader" published in the October 1979 issue of "Arms Gazette" and LoPiano's article "Retracing their Steps…A Guide for Researching Inscribed Civil War Firearms." Giles W. Dart was a salesman for Colt in New York City. During the Civil War, Dart was an officer in the 24th Connecticut Volunteer Regiment. Wilson notes that the inscription on the revolver "is of the most rare type, the early one, which was sometimes in a single line, and sort of italic, rather than pure script. Usually presentation guns in this period from 1852-64 were inscribed by Gustave Young himself or one of his assistants." Extensive research at the New York Historical Society and Museum of Connecticut History map out a timeline connecting Giles Dart, a Hartford native, to the New York City firm Wm. Sloane & Co. which was located at the 593 Broadway address marked on the bottom of the Colt case during the time period of 1859-1862. This Model 1849 was most likely intended as both a gift and a sample of Colt's fine craftsmanship to elicit sales from the New York business establishment. Records show that Dart returned to Connecticut at the outbreak of the Civil War and served as Chief Quartermaster for Grover's Division, Department of the Gulf, at New Orleans. The Department of the Gulf was rife with fraud under the infamous Benjamin F. "Beast" Butler. Lieutenant Dart was charged with improprieties in running his department, court-martialed and cashiered from the army. Copies of Dart's military service records, including court martial records, are also included. An accompanying letter of provenance from S.P. Stevens to Tom LoPiano, Jr. states he bought this revolver at a Tulsa gun show in the summer of 1967 or 1968 and sold it to Leo Bradshaw. This is a historic Samuel Colt personal presentation, cased Model 1849 Pocket Revolver.

Very good plus. The barrel has a blue/brown patina and retains strong traces of the original blue finish. The right side of the barrel lug and wedge have a number of shallow dings. The cylinder has a brown patina with traces of the original blue finish and retains 80% of the scene. The rear cylinder face percussion nipples and hammer have light flash pitting; all of the cylinder safety pins remain. The loading lever has 70% original casehardened with strong colors. The frame has been lightly cleaned and has silver-gray patina with some scattered age discoloration. The grip straps have 30% original silver; the exposed brass has a mellow age patina. The inscription is sharp. Grip is very fine with most of the high gloss varnish present and a number of small dents in the heels. The factory case is good with repaired crack on the lid and light storage wear. The faded original lining has high spot compression marks and small tears. The flask is good with dark age patina and several minor dents. The mold is good with faint marking and scattered minor dents and scratches. A rare Samuel Colt presentation, factory cased Colt Model 1849 Pocket revolver in fine original condition. 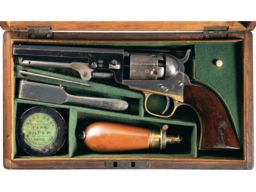 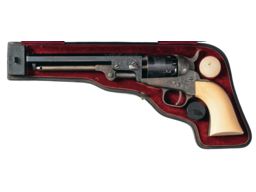 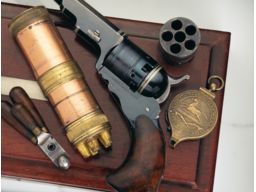 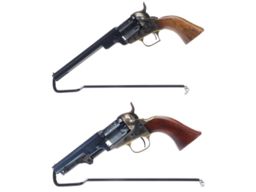 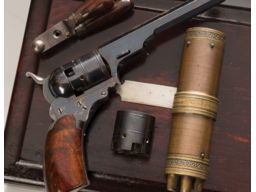 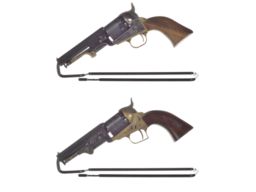