The Colt Model 1871-72 Open Top Revolver is highly prized by collectors for its limited production and its significance as the transition model between the Colt cartridge conversions and solid frame Single Action Army revolver, paving the way for the Single Action Army which was an immediate success shortly thereafter. Approximately 7,000 Model 1871-72 revolvers were manufactured in 1872 and 1873. This particular revolver features a wonderful profuse period Nimschke style New York engraving consisting of mostly floral scrollwork on a punch dot background along with a star burst pattern behind the front sight, fan motifs on the recoil shield, loading gate and top of the back strap, entwining line and dot pattern on the butt and trigger guard, and checkerboard pattern on the ejector rod housing. The rarity of the period retailer engraving is explicitly noted by R.L. Wilson in "The Book of Colt Firearms" on page 237, "Of the few known engraved [Model 1871-72 revolvers], the majority were decorated outside the Colt factory, principally by the dealers Schuyler, Hartley and Graham of New York City." The top of the barrel has the one-line New York address, "COLTS/PATENT," which appeared on the first 1,000 revolvers produced, is stamped on the left side of the frame, and the cylinder has the roll engraved naval engagement scene along with engraved scallop bands. The hammer, cylinder and ejector rod housing are plated in gold, and the remaining surfaces are plated in nickel. The loading gate has the assembly number "125." Matching serial numbers are on the frame, barrel, trigger guard, back strap, and cylinder.

Exceptionally fine overall. The barrel, frame and grip straps retain 95% plus of the retailer applied nickel plating with some very scattered edge wear and general loss on the barrel lug. The engraving is crisp. The remaining surfaces retain traces of gold in the protected areas, otherwise showing an untouched smooth brown patina. The cylinder has some bruising on the front edge and retains virtually all of the crisp naval scene. The grip is very fine with slight age shrinkage, couple surface chips along the high edge, few typical age hairline cracks mostly on the bottom and crisp checkering. Mechanically excellent. A fantastic showpiece of one of the handful of known New York retailer engraved Model 1871-72 Open Top Revolvers that will make a grand statement in any Colt collection no matter how advanced. 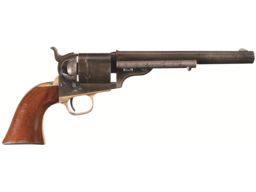 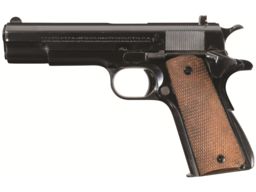 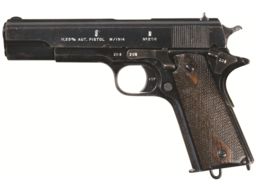 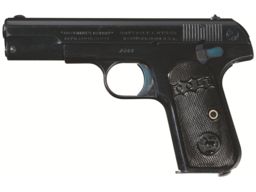 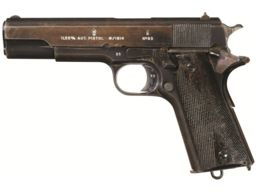 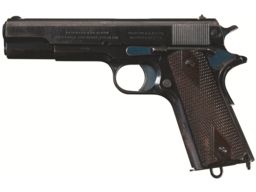