Active for a short time from about 1831-1832 until about 1835-1836 , James English and Henry Huber, Jr. (credited as the first American smiths to produce a proper clip-point Bowie, and reported by some sources as a supplier of edged weapons to none other than Jim Bowie himself) operated out of Philadelphia, Pennsylvania, and were most famous for their "Sheffield Works" line of knives. While most certainly named to take advantage of Sheffield, England's reputation as one of the great blade heartlands of Europe, English & Huber weren't just coasting on the name, instead producing some of the best knives to be found on the American market. Measuring 12 1/2 inches overall, with an 7 3/4 inch clip point blade with a serrated spine. Marked "PHILADELPHIA" on the right ricasso and "J.ENGLISH/& HUBERS" on the left. A pair of ball quillions are mounted on the German silver oval guard, with a smooth contoured, one-piece grip mounted with blank inscription panels and brass bead accents, and a German silver ferrule/pommel cap. The sheath is made from tooled black leather, with German silver fittings. Includes a modern hardwood case marked "BOWIE" on the lid.

Very good, the blade showing mostly a bright grey patina with some scattered light pitting, evidence of extensive sharpening, minor nicks in the edge, and crisp clear markings. The grip is also very good showing generally an attractive aged appearance with a few hairline cracks and an absent bead on the right. The sheath is good showing moderate wear on the leather and attractive aged patina on the fittings. 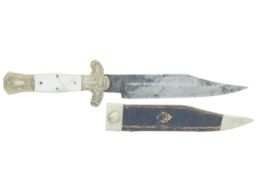 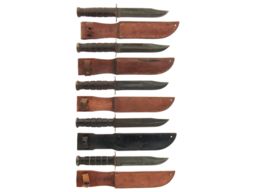 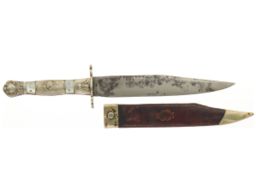 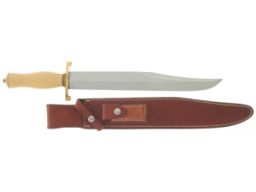 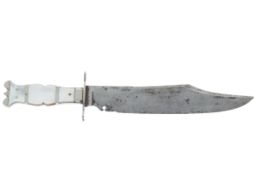 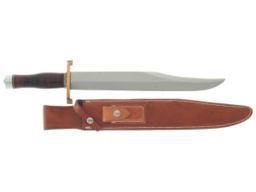