Manufactured in 1864-1865. Fine floral scrollwork on a punch dot background decorate the barrel lug, cylinder, frame and back strap. The sides of the barrel feature a flourish of scrollwork at the breech and entwining line motif. The upper left barrel flat has the inscription: “Presented to C.G. Batchelder by Officers of the USS Stars & Stripes/For the rescue of two of those Officers at the risk of his own life.” Both grip panels are numbered to the gun. The left grip panel features a wonderful relief carved Union patriotic motif. Matching assembly marks are on the grip frame and barrel. The period partitioned case contains a cleaning rod, case key, container and empty ultra rare period S&W manufactured dark blue label .32 cartridge box. Batchelder and the rescue referenced in the inscription have yet to be identified. Charles G. Batchelder of the 18th Regiment, Veteran Reserve Corps and several Charles Batchelders serving with various Massachusetts and Maine regiments are listed in the U.S. National Park Service Civil War Soldiers and Sailors database. A search for sailors lacked any results. Nevertheless, this high presentation grade S&W is a grand expression of the naval officers’ appreciation and acknowledgment of Batchelder’s assistance during a life or death situation. Purchased by the U.S. Navy in 1861, the USS Stars and Stripes was originally assigned to the Atlantic Blockading Squadron and participated in the attacks at Roanoke Island and New Bern in early 1862. By the fall of 1862, the 407 ton steamer gunboat was reassigned to the East Gulf of Mexico Blockading Squadron off the coast of Florida and went on to destroy a Confederate fishery at Marsh Island while also capturing troops stationed there. The ship’s crew was credited for capturing the schooner Charity, the British ship Mary Elizabeth while attempting to deliver salt and fruit to the Confederacy and the schooner SS Laura and assisted in destroying the steamer SS Modern Greece. After the Civil War, the ship was sold at public auction for commercial use, renamed Metropolis and was wrecked in early 1878. Provenance: The Dr. Gerald Klaz Collection

Very fine. The barrel and frame retain 90% original nickel plating, and the remaining surfaces retain 30% original nickel with the balance a smooth dark patina. The engraving is crisp. The grips are fine with a chip absent near the bottom (left panel) and distinctive relief carving. Mechanically needs work as cylinder does not rotate when action is cycled. The case is fine with minor handling/storage marks and high edge wear on the lining. A very interesting Union Navy presentation S&W No. 2 Army revolver that will be a great addition to any S&W or Civil War collection. 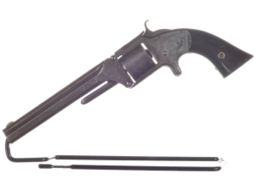 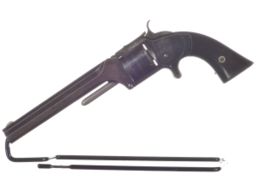 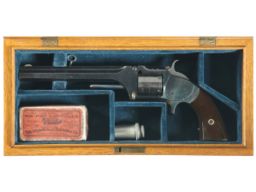 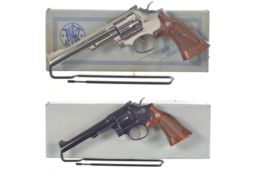 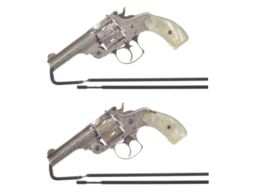 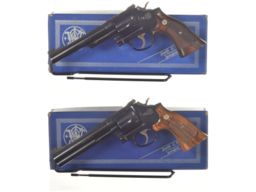