This outstanding and incredibly scarce early percussion revolver is documented on page 128 of "A Review of 162 Antique Arms and Pertinent Objects. . ." by Robert Held in 1976 and listed as "A very rare Italian five-shot muzzle-loading percussion revolver on the Collier system, 1820-30..." The octagonal Damascus barrel has finely grooved "micro-groove" rifling, a dovetailed blade front sight with large rounded base, "Mazza Armiere di S.A.R. Il Princ. di Salerno" (Mazza Gunmaker/Armorer to His Royal Highness the Prince of Salerno) in gold inlaid script on the upper rib, flourishes of scroll engraving on the upper and lower ribs near the breech, and a notch rear sight at the tail of the upper rib. The cylinder has dual gold bands (one broad and one thin) near the front of the chambers along with an engraved border at the leading edge, nicely shaped cups around each of the nipples and gold inlaid 1-5 respectively on each chamber. The cylinder is manually pulled rearward in order to be advanced by hand while the lock is at full-cock. Each chamber has a rounded extension at the front that fits within the breech end of the barrel providing a tighter gas seal. The breech plate has acanthus scroll, border, and meander engraving. The lock has "Mazza/Napoli." inlaid in gold script within a gold inlaid oval along with border and acanthus scroll engraving. The scroll designs on the hammer have a subtle mask design. The trigger is single set and is enclosed in a scroll engraved trigger guard with a spur. The left side plate features a pair of waterfowl. The nicely figure European walnut stock has fine checkering with scalloped borders, a blank gold wrist escutcheon with light border design, a horn border on the pommel, and a domed steel pommel cap with floral engraving. The Prince of Salerno in this period was Leopoldo Giovanni Giuseppe Michele of Bourbon-Two Sicilies (1790-1851). He was the sixth son of King Ferdinand I of the Two Sicilies (1751-1825) and younger brother of King Francis I of the Two Sicilies (1777-1830). Salvatore Mazza was active from at least 1820 to 1870. In 1842, he is noted as the creator of a rapid fire eight-shot revolver. He also exhibited revolvers among his wares at the International Exhibition in 1862.

Very fine. Nearly all of the original gold inlay remains, and the engraving remains distinct. The barrel retains 80% plus of the original brown finish and has distinct twist pattern and minor wear. The casehardened cylinder, lock, and furniture retain 80% of the original case colors and have some light spotting and mottled gray and brown patina where the colors are fading. A small piece of the spring ahead of the cylinder is absent. The stock is fine and has crisp checkering, some light dings and scratches, attractive figure, a faint crack above the tail of the lock, some cracking and pieces absent from the contrasting pommel border, and a slight gap between the stock and rear of the breech plate. The revolver remains mechanically excellent. Collier revolvers are rare and historically significant firearms as important predecessors of Samuel Colt's revolvers. The percussion "Third Model" Collier revolvers are very rare, and those by other firms are even more so. This revolver with its high condition, bright gold inlays, and high overall condition is truly worthy of any advanced firearms collection. 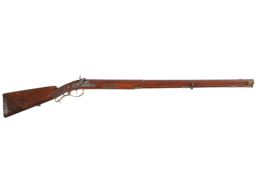 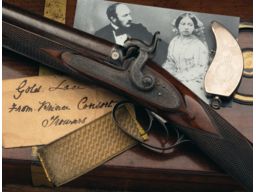 Lot #323: Cased Trulock & Harriss 14 Bore Percussion Side by Side Shotgun 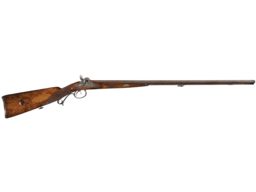 Lot #299: G.M. Funck Percussion Side by Side Shotgun 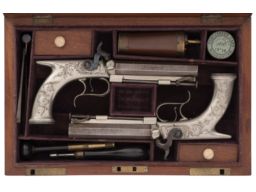 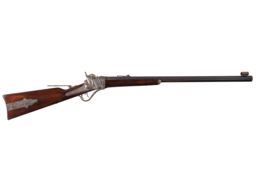