This is a outstanding example of an original commercial contract series I Luger pistol that was produced in 1940. These Lugers were originally produced as part of a Krieghoff/Luftwaffe military contract pistol, but they were rejected by the Luftwaffe and subsequently resold by the Krieghoff factory on the commercial market. These are not in a separate serial number range and are instead a "commercial" subvariation of the military contract serial number range, with documented serial numbers in the 10,600-10,900 range. Some will show Luftwaffe acceptance proofs intermixed with the Krieghoff rejection proofs and Nazi commercial proofs. It is estimated that less than 50 of this series were actually manufactured. These Krieghoff Lugers still show unusually high quality of the fit and finish on the various parts. The chamber area is blank, and it has the late production C-2 style Krieghoff toggle marking that has the smaller "C" style radii anchor with the left point of the anchor just slightly outside the "H" letter and the right point of the anchor touching the bottom of the "K". The right side barrel extension has the five-pointed factory rejection star, and a partial "Luftwaffe Eagle/2" acceptance proof is on the frame rail. To facilitate commercial sales, this example had the 9 mm barrel replaced with a commercial 7.65 mm barrel as the military and police had priority over 9 mm ammunition. The left side of the barrel extension, left frame rail, underside of the barrel and top of the breechblock have the Nazi "Eagle/N" commercial proof applied after being rejected by the Luftwaffe. Some of the various smaller parts still retain their original Luftwaffe "Eagle/2" acceptance proofs. This Luger is numbered in the commercial manner with the full serial number on the front of the frame and the last two digits of the serial number (60) stamped on the various other parts and some parts unnumbered. It has the early style brown plastic grips with the coarse checkering and narrow border. This pistol is complete with an unmarked, nickel-plated magazine with an aluminum base that is only stamped with the serial number "10860".

Excellent with 95% of the blued finish overall, with some touch up on the barrel, and light wear on the edges and high spots overall. The smaller parts retain 70% of their original straw color overall. The grips are also excellent. A very scarce example of an early military/commercial contract 1940 era Krieghoff Luger pistol in rarely seen 7.65 mm. 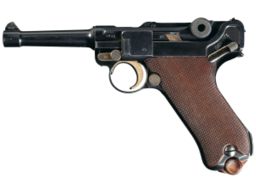 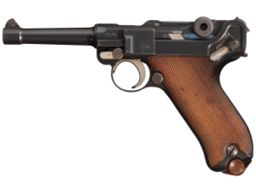 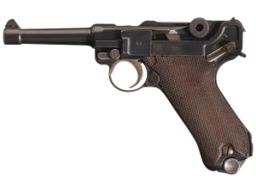 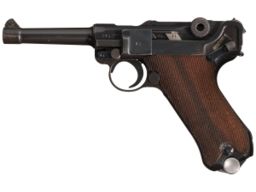 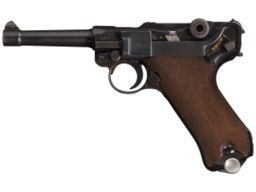 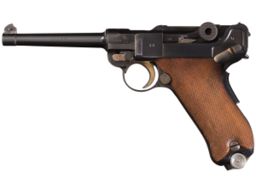