This is one of an estimated 850 No. 1 pocket pistols with a 3 1/2 inch barrel manufactured by the New Haven Arms Co., New Haven, Connecticut, in 1857/58. The pistol has the distinctive octagon barrel with integral six-shot magazine, round finger hole in the lever and flat bottom grips. The pistol is fitted with a pinched blade front sight on the barrel and a notch rear sight at the rear of the frame. The top barrel flat is marked "NEW HAVEN CONN./PATENT FEB. 14. 1854." The deletion of "VOLCANIC REPEATING ARMS CO." from the barrel legend occurred after Oliver Winchester assumed control of the Volcanic Repeating Arms Co. and re-organized it as the New Haven Arms Company on May 1, 1857. The silver plated frame has a factory engraving consisting of floral scrollwork and borders. The serial number is stamped on the left side of the grip frame and on the back of both grip panels. These pistols retailed for $13.50 at the time of production but an added expense for engraving and plating as seen on this pistol brought the grand the total to $15.00! Volcanic firearms are historically significant and represent an important step in the development of American repeating firearms and self-contained cartridges. The lever action and integral spring-loaded magazine introduced with Volcanic pistols and carbines served as the basic design for the Henry rifle and the Winchester Model 1866, 1873 and 1876 rifles. Oliver Winchester's investment in the Volcanic Repeating Arms Company eventually led to the establishment of the Winchester Repeating Arms Company.

Very good plus. The barrel retains traces of faded original blue finish with the balance a crisp smooth brown patina and a couple patches of pitting. The fine untouched frame retains traces of original silver plating in the protected areas, heavier at the front, with the exposed brass having a highly attractive even mellow aged appearance. The engraving is crisp. The grips are fine with most of the original varnish, a series of dings on the bottom, couple tiny chips at the toe, some high edge wear, minor handling marks, and much of the original varnish remaining. Although the hammer holds at the full cock position, it will not release properly when the trigger is pulled. A solid representative example of a Volcanic pistol for your Winchester or American antique firearms collection. 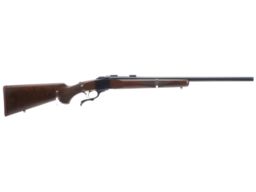 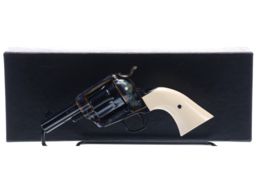 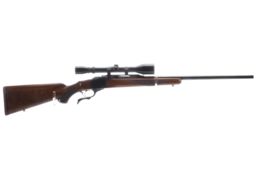 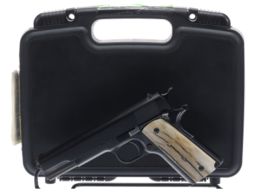 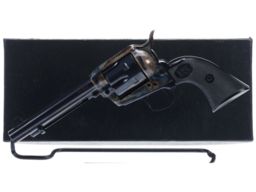 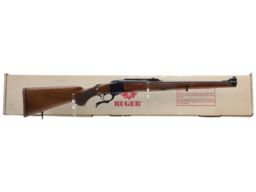