Manufactured in 1934, these Colt .38 Super pistols had become very popular among law enforcement agencies, including the F.B.I., during the prohibition era because of their ability to penetrate the body armor of the day as well as most vehicles. The left side of the slide has the standard two-line address and patent dates marking, while the right has the standard .38 Super caliber nomenclature along with a Rampant Colt. The right side of the frame is marked with the serial number and "12" on the trigger guard, while the left of the trigger guard has "W/VP". The front grip strap is engraved with "F.B.I. 01". It is fitted with blade and notch sights, wide checkered hammer, long grip safety, arched checkered mainspring housing, a short stamped trigger, two-tone magazine with .38 Super marked baseplate, and full checkered grips. The included factory letter confirms the current configuration (grips not listed) as well as shipment to Joseph Lorch, Colt's sales representative for federal agencies, for the Federal Bureau of Investigation on 23 April 1934 in a 25 gun shipment. Also included is a September 1956 National Sheriff's Association letter from R.A. Miller stating that he sold the pistol, which is listed by serial number, to Harlon B. Carter, who at the time was the chief of the United States Border Patrol. Carter would later go on to become the Executive Vice President of the N.R.A. from 1977 to 1985. Also includes the original Colt maroon box and a few documents pertaining to Carter's time as N.R.A. Executive Vice President. Provenance: The Dr. Robert Azar Collection 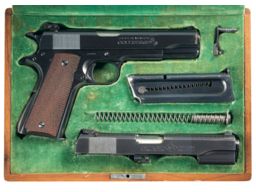 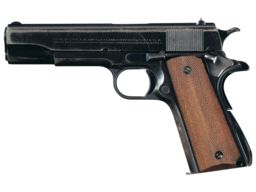 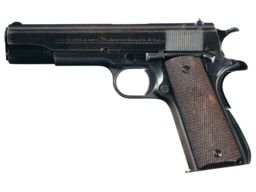 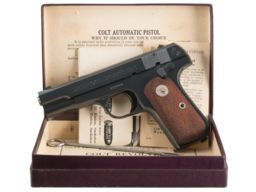 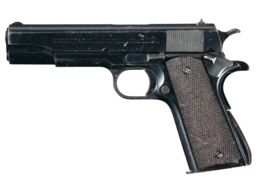 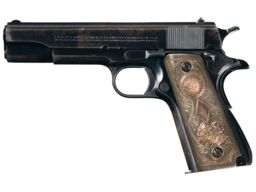