This is an example of the exceptionally rare and iconic North American Arms Co. U.S. Model 1911 semi-automatic pistol, that was produced in late 1918 in Quebec, Canada. In early July 1918, the U.S. Government issued a contract for 500,000 Model 1911 pistols to the North American Arms Co., previously the Dominion (Ross) Rifle Plant. The company leased the plant for manufacturing, and, as part of the contract, the U.S. Government was to supply all of the raw materials necessary for production. However, due to material shortages during the war and the time it took the plant to get tooled up for production, the government was only able to supply enough material to produce approximately "100 sets" of initial start-up or prototype parts. Due to the armistice of November 1918, the contract was canceled in December of 1918 with no examples of completed pistols ever being accepted by the U.S. Government. As part of the contract termination settlement, the U.S. Ordnance Board did eventually accept/reclaim a large portion of the manufactured and completed parts and assemblies, most of which were later disposed of. Some however, were later assembled into completed pistols. These 100 pistols were uniquely stamped with only a controlling serial number in two locations, the left lower area of the frame under the grip panel, and the left upper rear corner of the slide, with this exampled numbered "42". Bady theorizes that the unique placement of the serial numbers on the known "standard" examples of the North American Model 1911s suggests that none were ever submitted for government approval, which would indicate that the pistols were assembled after the suspension of the contract. Information on these "standard" examples from North American can be found on p. 219-221 of "U.S. Military Automatic Pistols 1894-1920" by Meadows/Ellis and on p. 201-204 of "Colt .45 Service Pistols: Models of 1911 and 1911A1" by Clawson. The left side of the slide is marked "MANUFACTURED BY/NORTH AMERICAN ARMS CO. LIMITED/QUEBEC, CANADA." and "42" behind the serrations. "42" is marked on the left of the frame under the grip and mostly visible on the left of the trigger. It is fitted with a serrated slide stop, checkered thumb safety, checkered magazine catch, short grip safety, smooth hammer, a smooth straight mainspring housing, checkered diamond pattern grips, and an unmarked, full blue, pinned based magazine with lanyard loop. Provenance: The Dr. Robert Azar Collection

Exceptionally fine, retains 85% plus of the original blue finish with the balance thinned to show a mixture of original blue and grey-brown patina. The grips are excellent with some scattered light handling marks and crisp checkering overall. Mechanically excellent. 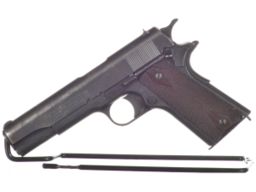 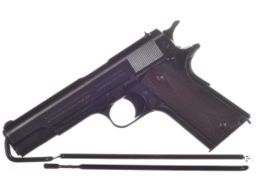 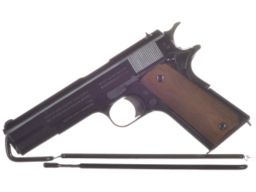 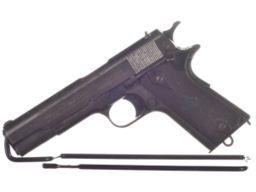 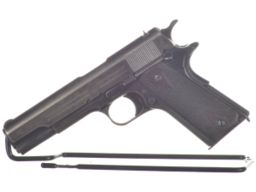 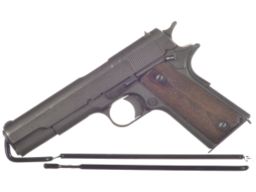