As described in the article "An Extraordinary Achievement: The First Handgun-Mounted Light?" by J.B. Wood published in "American Rifleman" October, 2013 (copy of text included), this revolver is the only known example of what may be the first practical electric targeting/illumination device mounted on a firearm. While the electric flashlight arrived on the scene in 1902, the delicate bulb filament presented a challenge for anyone who wanted to attach one to a gun, as the force of recoil could break the light. In 1911, George Seely of San Francisco addressed the problem with an integrated rubber and spring shock assembly that provided some protection for the bulb. Patent #1029951 was granted in 1912, and records show the Seely Night-Sight & Arms Co active in 1915. In many, many ways this device was light years ahead of its time, and the world really wasn't ready for it. Battery and bulb technology simply weren't where they needed to be to make a design like this practical, and the work to install one was significant, deterring all but the most committed. Seely's design was clever, but not successful; California records show that the business did not cover its corporation taxes for 1915, causing it to be shuttered in 1916. While not successful in its day, decades later the use of on-board illumination and targeting devices came back around, and in the current era rank among the most popular handgun accessories on the market. As originally manufactured (per the included letter), this revolver was part of a 10-piece shipment to the Dunham, Carrigan & Hayden Company of San Francisco, California on April 9, 1915. Standard markings are present, and many modifications have been made to the revolver. The Seely device rides below the barrel, attached to a bracket that is secured with at least two drilled and tapped screws. A pair of thin steel tubes connects the light to the frame, where a series of cunningly cut channels allow the wire connections to run through the frame to an aluminum grip unit which houses both the battery and a pressure-activated power switch. Out of concern for the safety of the device we have not attempted grip disassembly, but the American Rifleman article notes that a modern-made battery is installed, which powers the device. The revolver includes a custom fit black leatherette case, a vintage Winchester flashlight battery, a spare bulb and a small screwdriver. Provenance: The Clive Cussler Collection

Excellent, with 95% of the original blue finish, showing some edge wear, a bit of rubbing on the barrel from installation of the bracket, and mild handling marks overall. The grip module shows some light handling. Mild rubs and stains are present on the case. Both the revolver and the light are in good order. A significant milestone in weapon design, and possibly the only one of its kind. 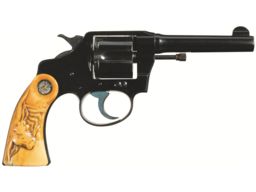 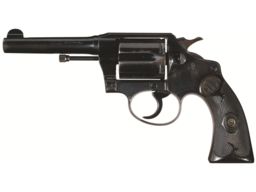 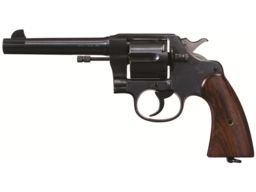 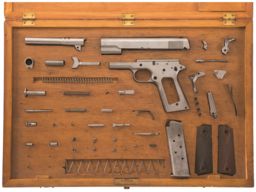 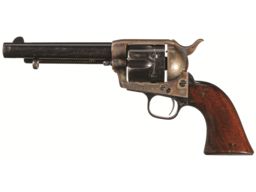 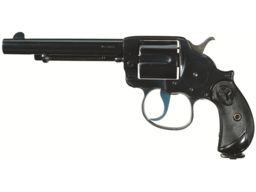