Introduced in 1964, the SVD was designed around the Soviet doctrine of the infantry sniper; as more and more infantrymen were equipped with submachine guns and assault rifles to meet the demands of close-quarters urban fighting, the loss in overall range was mitigated by issuing full-powered rifles to skilled marksmen permanently attached to infantry squads, who would engage threats outside the reach of the rest of the unit, in addition to thinning out targets of opportunity like officers, NCOs, radiomen, and the like. While NATO forces did not have a comparable unit through the Cold War, the Designated Marksman concept did come into its own during the War on Terror, with repurposed M14s, AR-10/AR-15 derivatives and similar rifles filling the niche. Hooded pin front and tangent rear sights, with the "arrow in triangle" arsenal mark over "1986" and the serial number on the underside of the receiver, with matching bolt carrier, bolt, hammer, safety sear, safety lever, gas cylinder, receiver cover and trigger housing. Milled receiver, with integral scope rail on the left side. Smooth stock, with vented hand guard, "12914" marked thumbhole buttstock, clamp-on cheekpiece and a cupped buttplate. Included with the rifle is an undated PSO-1 rifle scope with a rubber lens cap, sliding sunshield, integral active infrared detection filter and canvas cover, an NSP-3 night vision scope with case and accessories, a canvas rifle cover, and a canvas magazine pouch holding 3 extra magazines.

Exceptionally fine, with 85% plus original matte black finish, showing mild wear and handling marks overall. Mild oxidization is visible, concentrated on the flash hider and present on some of the internal parts. A crack has formed in the takedown lever. The stock is very fine, with scattered mild scuffs and dents. The PSO scope has fine optics and mild wear, and the NSP scope shows some light wear; the electronics on both scopes are untested. Mechanically excellent. 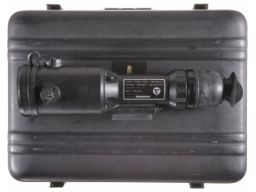 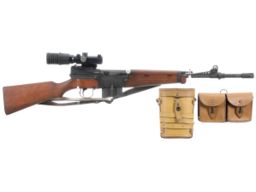 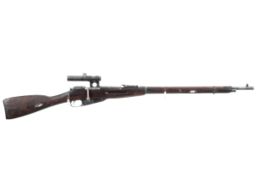 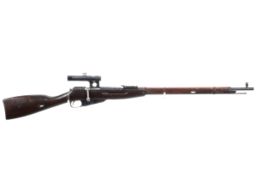 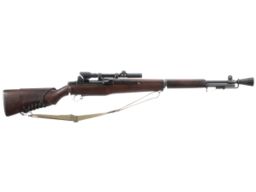 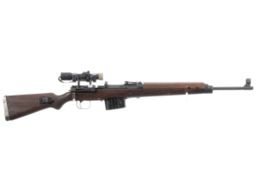