The Model 1866 was essentially a Henry Rifle with improvements invented and patented by Winchester shop Superintendent Nelson King in 1866. The side loading gate, modified magazine and new walnut forearm eliminated the primary defects in the Henry rifle and created the lever action rifle associated with the name "Winchester". This carbine was manufactured in 1868 and features the desirable early production barrel legend: "HENRY'S-PATENT-OCT. 16. 1860/KING'S-PATENT-MARCH 29. 1866". Another early production feature is the serial number stamped on the left side of the lower tang under the stock. Along with the serial number are the letters "CO." The matching serial number also appears on the stock inlet and buttplate. The underside of the stock is stamped with the number "1." The carbine features a blade front sight integral to the front band, two leaf rear sight, saddle ring on the left side of the receiver, single upper tang screw, and trapdoor buttplate. Included is a three piece cleaning rod in the butt. The '66 secured Winchester's place in the annals of the West and launched a long line of successful Winchester lever actions that remain popular to this day and still retain the basic form of the '66. It was one of the earliest and most widely used repeating rifles in the American West and saw use in conflicts over land, gold, and other resources on the frontier in the second half of the 19th century in the hands of settlers, Native Americans, outlaws, lawmen, and hunters.

Very fine. The barrel and magazine retain 60% plus original blue finish with thinning to brown on the balance. 60% original nitre blue remains on the loading gate. 40% plus of the original case colors remain on the hammer. The exceptionally fine brass has a highly attractive mellow appearance, and the side plates fit tightly. The loading gate retains 40% bright original nitre blue. The wood is fine with a few hairline stress cracks at the rear of the lower tang and some minor dings and scratches, mostly on the forend. Mechanically excellent. An above average condition Model 1866 saddle ring carbine with Henry's Patent barrel legend that will be a welcomed addition to any Winchester or frontier collection. 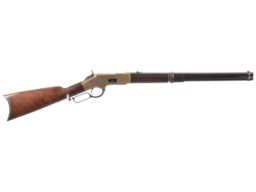 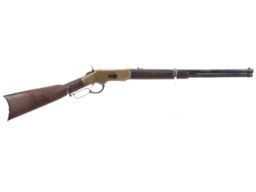 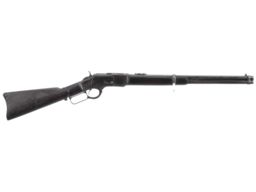 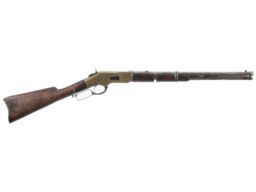 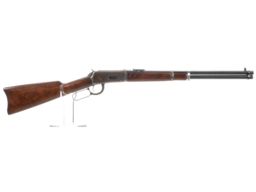 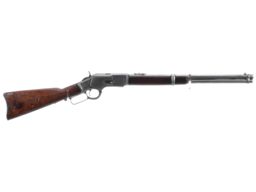