This revolver was manufactured in 1853 and has beautiful factory scroll engraving readily attributable to Master Engraver Gustave Young or his shop. The patterns are consistent with the examples shown in various books on Colt engraving, including in R.L. Wilson's books and would be an early example of his work for Colt. Young and L.D. Nimschke were both trained under Ernst Moritz and Gustav Ernst in Zella, Thuringia, Germany, before they immigrated to the U.S. Other less well-known German-American engravers trained there as well. Though they all have somewhat similar styles, Young developed his own patterns, and his work as Colt's main engraving contractor from 1852 to 1858 is identifiable and remarkable. The scrollwork on this revolver is inhabited by a bald eagle head above the wedge on the right, an open mouth dog head just ahead of the wedge on the left, another open mouth dog head on the left side of the recoil shield, and a closed mouth dog head below the hammer screw on the left. While Young is well-known for heads among his fine scrolls, four on a single revolver is very rare. The engraving has punched backgrounds and includes floral accents, ray/fan patterns, "COLTS/PATENT" hand inscribed in a panel on the left side of the frame, an early version of Young's wolf head design on the hammer, and some wavy borders. The dot marking used by Colt to denote arms selected for engraving and or special finishing is marked by the main serial number locations. Matching serial numbers are found on the loading lever, wedge, arbor pin, cylinder, barrel, frame, trigger guard, and back strap. A "2" is also marked by the serial number on the barrel and cylinder. The barrel also has a brass cone front sight and is marked "-ADDRESS SAML COLT NEW-YORK CITY-."

Very good plus with crisp engraving throughout, 80% original silver plating remaining on the grip frame, traces of original case colors and blue finish in the protected areas, mostly a smooth brown patina on the balance, minor oxidation, and general minor wear. The grip is fine and has attractive natural coloration and grain, some shrinkage, minor age cracks in the butt and on the right side, and minor edge wear. Mechanically fine. This is a very attractive example of Gustave Young's early work for Colt and one of the few Young engraved Model 1851 Navy revolvers to feature this many of his animal head designs among the scrollwork. This is definitely a very attractive classic Colt that would add value and interest to any collection. 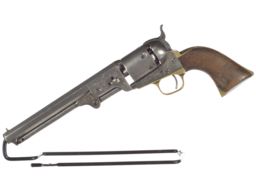 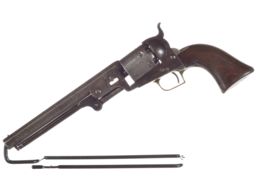 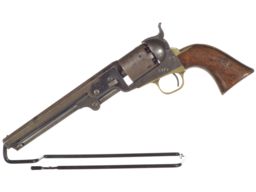 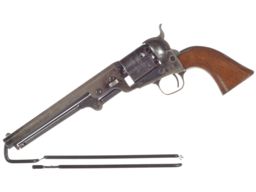 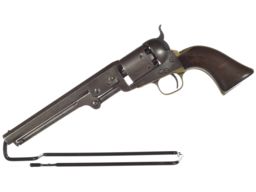 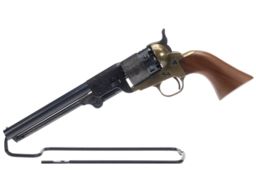