This extraordinary U.S. contract Colt Model 1860 Army revolver was manufactured in 1862 and is the benchmark example for approximately 129,000 Model 1860's purchased by the U.S. government as the primary handgun issued to the Federal cavalry from 1860-1863. This revolver has an 8 inch barrel, rebated cylinder, three-screw frame with stock cuts, steel back-strap with shoulder stock notch and brass trigger guard. The barrel, cylinder and back strap have the Colt military blue finish. The loading lever, frame and hammer are casehardened with vivid case colors. The trigger and screws are niter blue. The one-piece walnut grip is oil finished. The top of the barrel is roll-stamped "-ADDRESS COL. SAML COLT NEW-YORK U.S. AMERICA-" in a single line. "COLTS/PATENT" is stamped on the left side of the frame. The cylinder is roll-engraved with the Texas Navy battle scene, "ENGAGED 16 MAY 1843." and "COLT'S PATENT No./PAT. SEPT 10th 1850". The serial number, "35284" is stamped on the bottom of the barrel lug, frame, trigger guard and back strap. The cylinder is stamped with the partial serial number "3284" rather than "5284"; this is clearly a factory error as the condition of the cylinder matches the rest of the revolver perfectly. The Ordnance final inspection mark which consists of the script initials "PB" within a rectangle with rounded ends is stamped on the lower left side of the grip. The left side of the barrel lug is stamped with a "CC" Ordnance sub-inspection mark. Other Ordnance sub-inspection marks including "H", "L" and "S" are stamped on the primary revolver components. The streamlined Colt Model 1860 Army replaced the Colt Dragoon and Model 1851 Navy revolvers as the standard cavalry handgun in 1860. For the premier reference and study on the Model 1860 see The Colt Model 1860 Army Revolver By Mr. Charles W. Pate.

Excellent plus. The revolver is all original, appears to be un-fired and retains 98% plus of the original military blue and vivid color casehardened finish. The barrel has nearly all of the blue finish and shows the delicate polishing marks on either side of the front sight blade and loading lever latch. The cylinder retains 100% of the roll-engraved naval scene with light edge wear on the rebated portions and turn marks between the stops. The percussion nipples and front and rear face of the cylinder have no flash pitting. All of the cylinder safety pins remain intact and are not battered. The blue finish on the back strap has some light handling wear. The loading lever, frame and hammer retain 98% of the casehardened finish with fiery case colors. The sides and face of the hammer show no flash pitting. The brass trigger guard has an un-polished patina. The grip is in new condition with raised, feathered grain and a perfect Ordnance final inspection mark. Most U.S. contract Model 1860 Army revolvers were issued during or after the Civil War and show some handling and firing wear. This is an as-issued, un-fired, U.S. contract Model 1860 Army revolver. This may be the best U.S. Civil War Contract Colt 1860 Army revolver with three-screw frame extant. 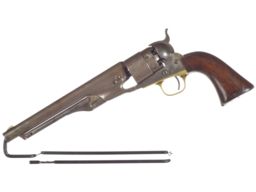 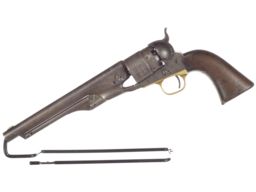 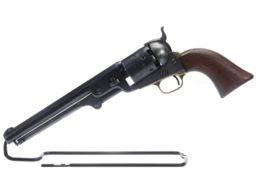 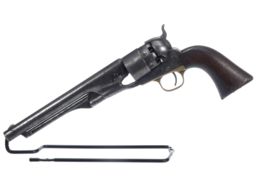 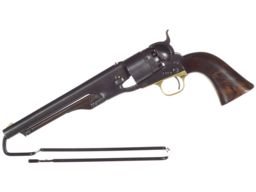 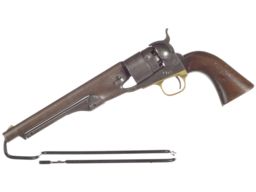