An incredibly rare example of a Krag-Jorgensen Model 1898 bolt action rifle equipped with an experimental Parkhurst-Zalinski index attachment, as described on pages 198-200 of "The Krag Rifle" by Lt. Col. William S. Brophy in which it states, "At least two prototype examples of a clever modification to the Krag exist. These inventor's models have a system incorporated into the receiver that indicates the number of cartridges in the magazine and also whether a cartridge is in the chamber... Co-invented by [Edward G.] Parkhurst (inventor of clip-loading device) and Captain E. K. Zalinski [L. is the correct middle initial], U.S.A. Retired. It appears from correspondence authored by Captain Zalinski that he tried to interest the Navy, through Admiral Charles O'Neil, in modifying the Krags in Navy service with both the Parkhurst clip-loading device and the Zalinski-Parkhurst index device." A memorandum about the index attachment, written in 1901 by Zalinski and addressed to O'Neil, states, "It is desirable for the soldier to be able to ascertain or to know whether a cartridge is in the barrel of the rifle and approximately the number of cartridges in the magazine. To this end, the attachment as shown in rifle sent herewith, could be applied without much additional cost. The index finger on the right hand side points at numerals which show the number of cartridges in the magazine. It is of such nature that, even in the dark, the soldier can tell approximately by feeling the number of cartridges in the magazine. It is defective however, in that the finger will not show when the last cartridge is still resting in the magazine. This defect is provided for by a pin on the left hand side, which projects as long as there are one or more cartridges in the magazine. Should it alone be desired to indicate the presence of cartridges, in reserve in the magazine, without reference to numbers, this side pin would serve by itself and the index finger on the right be omitted. To show the presence of the cartridge in the gun barrel, there is a projecting piece on top of the flat ejector spring, which does not project when a cartridge is in the barrel. As soon, however, as the barrel is without a cartridge, this projects, and can either be readily seen or felt: in other words as long as the cartridge is in the magazine the upper surface of the bolt is smooth, and vice versa." Army Captain Edmund Louis Gray Zalinski is credited with numerous artillery-related inventions and patents. Edward G. Parkhurst is credited with previous patents relating to improvements of the Gardner machine gun during his employment at Pratt & Whitney, as well as improvements and patents in machinery. Features of the rifle include a blade front and 1,800 yard M1896 folding ladder rear sight, oil-quenched receiver, blue finished barrel and barrel bands, nitre blue extractor, bright bolt with knurled cocking piece, smooth straight grip stock with grasping grooves, "NO. 3" marked with punch letters ahead of the trigger guard, "97" above a circled script "P" proof mark behind the trigger guard, boxed script "JSA/1898" inspection cartouche marked on the left side of the wrist, "PARKHURST-ZALINSKI/INDEX ATTACHMENT/FEB. 1901" marked with punch letters on the right of the buttstock, and a smooth, blue steel trapdoor buttplate containing a three-piece cleaning rod and oiler. "GDM" (George D. Moller) collection initials marked at the toe of the stock. Includes an 1898 dated M1892 bayonet, type IV metal scabbard, brass muzzle cap, and period leather sling. Provenance: The George Moller Collection

Exceptionally fine, retaining 85% plus bright original blue finish with very light muzzle wear, light wear with brown patina on the buttplate, high polish refinished middle barrel band, and some light flaking on the trigger guard. Stock is excellent with attractive wood grains and color, some light handling marks, defined grasping grooves, and crisp markings overall. Mechanically excellent. Included bayonet is excellent and scabbard is very fine. This is the only Parkhurst-Zalinski equipped Krag rifle to ever be sold by Rock Island Auction and is as rare as it gets in terms of advanced U.S. Military rifles! 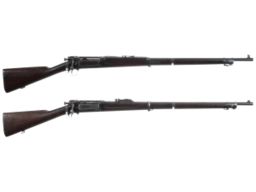 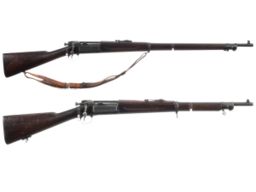 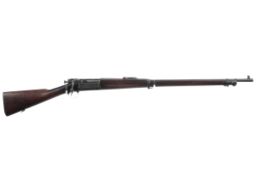 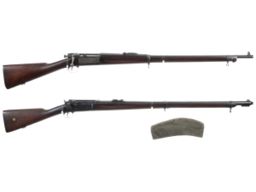 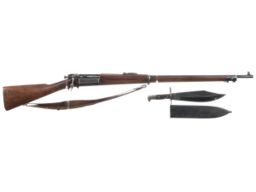 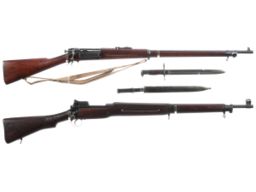