This rifle is item 1536A from the “Unique Collection Assembled by Recipient of Congressional Medal of Honor and Exhibition Shooter for Winchester” George Albee in N. Flayderman & Co.’s Catalog No. 103. Flayderman acquired Albee’s collection which he notes had been in a museum collection since Albee’s death. Flayderman notes documentation (not included) that indicated he worked on the development of the Winchester Hotchkiss and used one at Creedmoor in 1882. A target shot by Albee at that match was used to promote the Winchester-Hotchkiss. This rifle is listed as “Just About Mint Rare Variant Winchester Hotchkiss 2nd Model Full Stock Military Musket.” Albee is noted as “instrumental in developing” the safety and cutoff used on the 2nd Model Hotckiss. “Believe this is exact model used by Albee himself at [Creedmoor] shoots.” The extra-long tang, special sights, and brass sight covers are noted. Only a few target variations were made, mostly for U.S. Army shooting teams. Some of them were chambered for the 2.4 inch case, the standard cartridge used at Creedmoor for long range shooting. This one, which belonged to Lt. George E. Albee (1845-1918), was chambered for the standard 2.1 inch or 45/70 case. He is believed to have used this at Creedmoor over the summer of 1882 in the "Lorillard" matches. These matches, also called the "rapidity with accuracy" matches, required the use of military weapons and were determined by the number of shots and the score made on standard targets, all fired offhand, at 200 yards in sixty seconds. Albee fired an average of 19 shots per match with an average score of 55 points, which was a better average than his nearest competitor's individual highest score. This was perhaps to be expected. Albee served with Berdan's 1st U.S. Sharpshooters and the Wisconsin light artillery and infantry during the Civil War. He continued his military career after the war as a lieutenant in the U.S. Colored Infantry and U.S. Infantry, winning the Congressional Medal of Honor in the Brazos River Campaign in 1869. After retiring from the Army in 1878, he was employed by Winchester, including developing the Hotchkiss, and also served in the Connecticut National Guard, including as captain of the "National Blues" Company D 2nd Regiment Connecticut National Guard in 1891 and later as major and Brigade Inspector of Rifle Practice of the Connecticut National Guard shortly thereafter. At the time of the 1882 matches, he was working closely with Winchester. Letters exist from Winchester Vice President (soon to become President) Thomas G. Bennett scolding Albee about his low scores in the matches. After "Your various favors on the 3rd Inst.", which we can assume were scathing, Bennett apologized: "we recognize the difference in the rules." Other competitors in the matches using the Hotchkiss were R.T. Hare and M.W. Bull, both of Springfield Armory, who finished 2nd and 3rd respectively, and a few who only lasted one day. These matches were shot using the Hotchkiss "as a single loader," and Winchester used that in some of their sales flyers, pointing out that Hare had fired the Hotchkiss 32 times in 60 seconds as a single loader. This was faster than most magazine rifles had been fired. While we think that this was the rifle used by Albee at Creedmoor, we know that it was the one used in the 1882 trials, as it has the modifications suggested by the trial board and mentioned in one of the letters referred to above. These include the change in contour of the safety and cutoff knobs and the gas escape holes in the sides of the receiver. Albee's rifle is equipped with a Winchester long range tang sight. It is also fitted with brass covers for the muzzle, front sight, and rear barrel sight. The rear barrel sight has the range graduations marked in Eastern Arabic. It is a stepped sight, unlike any that Winchester normally used, and is a possible indication of why these rifles are so scarce in this country. The ramrod is also different with a separate head designed for use with the Springfield type stop in the bottom of the forearm. Winchester advertised these rifles, but as with other special Hotchkiss rifles, kept no records on their sale. The bolt on this rifle has the very short handle found on some sporting rifles, while the standard military rifle usually has a longer one. Provenance: George Albee, Flayderman Catalog #103, and the Collections of Frank Sellers and George Moller

Excellent with 90% bright blue except on the bolt which was finished bright. There is some scattered light surface oxidation on rear of receiver. The stock has a hairline crack visible at the wrist but shows little use. Mechanically excellent. 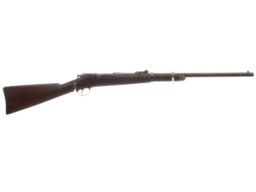 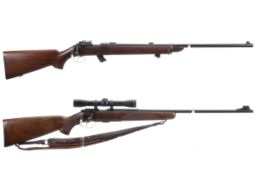 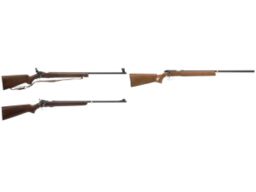 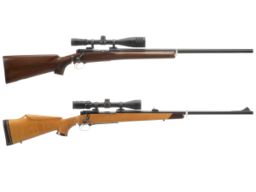 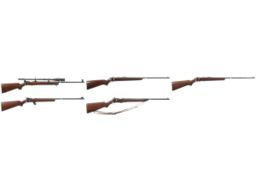 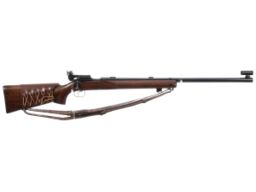