This incredible revolver was one of Elmer Keith's (1899-1984) favorite revolvers and was custom built for him while he was still a young man early in his famous career as an expert marksman. Keith owned and shot a great many revolvers, including others sold by Rock Island Auction, but none is as unique or as famous as this one. The revolver is chambered for .44 S&W Russian or .44 Special. The latter was one of Keith's favorites, and his experimentation with the .44 Special led to the popular .44 Magnum. The revolver is pictured on page 103 of Keith's popular book "Sixguns" and listed as "No. 5 S.A. Colt, converted by Sedgley to author and Harold Croft's design flat-top target" and also on page 169 being worn by Keith in the included holster with the caption: "Keith wearing George Lawrence belt and holster designed by Keith. S.A. Colt number 5." A picture of Croft and Keith in Durkee, Oregon, in August 1928 is on page 126 and shows Croft showing Keith one of his custom revolvers. Keith's revolver is also pictured in the included copy of "Gun & Ammo" from December 1967 in the article "Seein' Sixgun Sights" by Keith. The most significant documentation for the revolver is the article "The Last Word" by Elmer Keith in the April 1929 issue of "The American Rifleman." He notes, "My good friend, S. H. Croft, put in a lot of time, thought and money improving the S. A. Colt. Mr. Croft has designed the changes necessary to convert an ordinary S. A. Colt into the finest trigger single-action imaginable, either in the Featherweight model, or, at my suggestion, in a heavy, all-around 6-gun." He notes that Croft used the Bisley back strap bent to the same angle as the regular S.A.A. and paired it with a S.A.A. guard and front strap. Keith states, "after playing with Croft's guns a while I decided to have one of my S.A.A. guns worked over to incorporate some of Croft's improvements, with a few ideas of my own thrown in." The full details are worthy reading in the article. Keith indicates that Croft supervised the overall job and he and Neal K. Houchins of Philadelphia made the sights and the latter also fitted the barrel close to the cylinder. Keith wanted "a cross pin put through the front-sight band, and a set screw put in the rear of the flat-top frame and bearing against the rear-sight base, to lock the sight against a possible blow." R.F. Sedgley modified the frame with a flat top that extend back over the top of the hammer, fit the new base pin and catch, made the No. 3 type grip frame, welded the base onto the S.A.A. hammer to fill the longer cut in the top of the Bisley back strap, manufactured the wide trigger, and made and fitted the new mainspring. On the latter, Keith wrote: "The Croft-Sedgley spring is without a double the fastest in action of any S.A.A. spring, and should improve the S.A. greatly for target shooting. . ." The hammer had already previously been fitted with a Bisley style spur by J. D. O'Meara for Keith "by dovetailing and brazing in the Bisley thumb piece." Keith states, "We decided to call this gun model No. 5." It was tuned to an approximately 3 1/2 pound trigger pull. "To my notion this is the finest and best Colt in existence. I know there are many with inlay work and finer finish, but they lack Croft's many improvements, which are to me worth far more than all the inlay work, as they are a real help landing a bullet where I wish it to go. For general excellence of grip, balance, sights, trigger and hammer, I do not think this gun can be improved upon. Last spring I killed with this gun over 59 magpies, around two dozen crows and hawks, six horned owls, and a bobcat, to say nothing of over a hundred blacktail jack rabbits and a few woodchucks." He later indicates he even shot this revolver at animals hundreds of yards away. He indicates the grips were replaced by him after the custom work and notes that the carving serves to fill the palm of the hand. The exact age of the frame on this fabulously customized and engraved revolver is not clear. In place of the usual serial number on the frame, this revolver is marked "M5." The revolver a barrel turned down and fitted with an adjustable target front sight, an interesting cylinder pin release switch and pin with large grasping finial, a flat top frame with an adjustable notch rear sight, a Bisley style hammer, modified grip frame, and different mainspring. It is engraved with extensive floral engraving with serrated backgrounds. The top strap has the Masonic square and compass. The barrel has "RUSSIAN AND/S&W SPECIAL 44" in a panel and the one-line Hartford address on top. The left side of the frame has the two-line patent marking and circled Rampant Colt trademark. The back strap is inscribed "ELMER KEITH" down the back and "DURKEE, OREGON" on the butt. Includes a George Lawrence Co. 5 1/2 russet leather holster tooled with floral patterns. Provenance: Elmer Keith Estate Collection, Private Collection

Excellent, as custom made/upgraded to current configuration with 95% plus high polish dark blue finish with crisp engraving and light overall wear. The grips are also very fine and have crisp carving on the right panel, minor crack on the upper right, and attractive natural tones and grain. Mechanically excellent. This exceptional revolver is a unique piece of 20th century craftsmanship treasured and used by the 20th century's most famous revolver shooter. 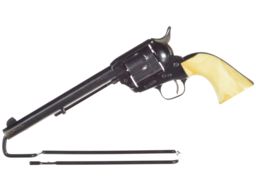 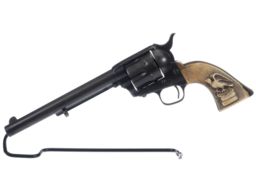 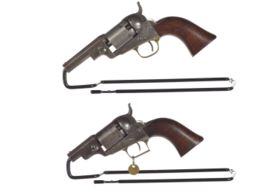 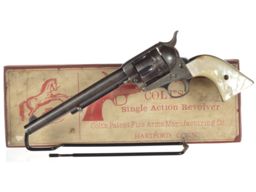 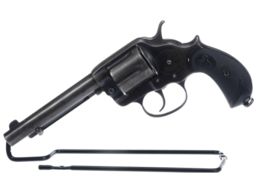 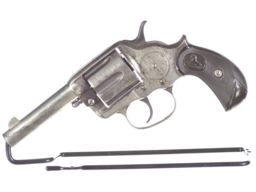