Beautiful .22 Hornet rifle custom built and hand crafted by Griffin & Howe of New York. Silver oval on the underside of the stock inscribed with initials "GC" attributed to Gary Cooper, one of the most famous American actors of all time who starred as Alvin York, and an avid sportsman. With a thirty-six year long acting career spanning from 1925 to 1961, Cooper was one of the top ten film personalities for twenty-three consecutive years, and one of the top money-making stars for eighteen years. In between acting, Cooper spent a lot of his free time tinkering with rifles in his gun room to prepare for his next hunt. He went on multiple safaris in Africa in which he was credited with over sixty big game kills, including a rhinoceros, two lions, and various antelopes. His safari experiences in Africa had a profound influence on Cooper and intensified his love of the wilderness. Ernest Hemingway, famous American novelist and sportsman, became Cooper's closest friend. Pg. 171 of the book "Gary Cooper American Hero" by Jeff Meyers states, "Their twenty-year friendship, sustained by Cooper's amiable temperament, was unusual for Hemingway, who became impatient with old friends and tended to break with them. For Cooper, Hemingway had a rare combination of qualities. Quite outside the world of Hollywood, he was an intelligent man who understood him and could talk about personal matters." Pg. 173 states, "Hemingway coveted Cooper's favorite rifle, a .22 Hornet with a German telescopic sight, and asked: 'Coop, if you die before I do, are you going to will me that Hornet?' Cooper promised to do so, and then said: 'Hell, I might just decide to give it to you now so I can watch you enjoy it.'" This Griffin & Howe .22 Hornet rifle is very likely the actual aforementioned rifle. Included with this lot is a large 27 1/4x42 inch frame containing an 18x25 1/2 inch movie poster "I LANCIERI DEL BENGALA" (The Lives of a Bengal Lancer). In the movie poster Gary Cooper is seen holding this rifle (note the matching wood grain) fitted with a different scope. The rifle is also identified in included photos from the promotional photo shoot of the Lives of a Bengal Lancer. The wood grain of the rifle in the photos can be can be matched like fingerprint to the gun. This same rifle seems to make an appearance in the actual movie, hanging on the wall in Cooper’s character’s living quarters. There are other photos that show the rifle with Cooper during an interview on the movie set Peter Libbetson (1935) as well as in his home gun room. Cooper use to take his rifles to movie sets for a little target practice when they were not filming. Beaded blade front sight on the tapered barrel marked "No. 1075 GRIFFIN & HOWE INC. NEW YORK" with the caliber designation "22 HORNET" marked on the left side just forward of the breech. Matted receiver ring. Fitted with a Griffin & Howe left side scope mount and Zeiss scope, right side mounted Lyman receiver sight base currently fitted with a blue ladder modified with no peep for scope clearance, jeweled bolt and follower, and knurled bolt handle. Deluxe checkered shadow line cheekpiece stock with horn forend cap, blue steel grip cap, checkered and border engraved steel buttplate with trap, containing the original ladder with peep for the Lyman rear sight. Includes two books, various photographs including Gary Cooper on hunts, and research.

Very fine as customized by Griffin & Howe, retaining 90% original blue finish with some very light muzzle wear, light handling marks, and scope with clear optics and some patches of light pitting. Stock is also very fine with some light handling marks, a scratch on the left below the breech, and crisp checkering. Mechanically excellent. This is a once in a lifetime opportunity to acquire the rifled attributed as being the famous actor Gary Cooper's "favorite Hornet rifle"! 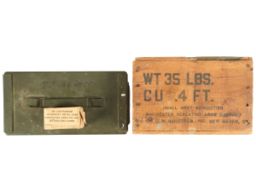 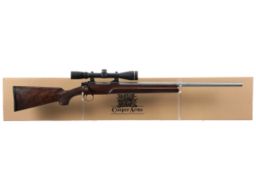 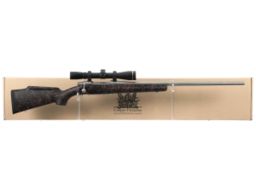 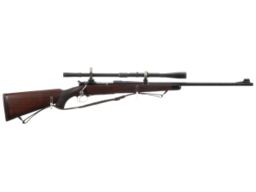 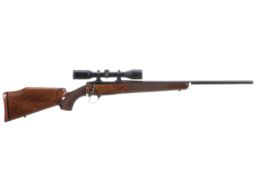 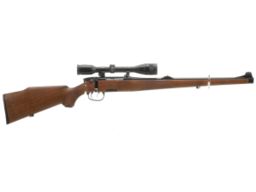