This is an excellent example of a U.S. Army issue Beretta M9 General Officers pistol. This model was introduced in 1986 based on the continuing need for the U.S. Military to be able to issue service automatic pistols to newly promoted General Officers. This specific pistol appears to have been issued to Brigadier General Roger C. Bultman., who at the time was stationed in the office of Chief of Army Reserves at the Pentagon and had previously held various leadership roles during the Vietnam War. The included general supply shipment worksheet lists Bultman as the recipient. These pistols in all respects were a standard Beretta M9 handgun only they were identified by a special serial number prefix of "GO". The right side of the frame is marked: "U.S. 9mm M9 BERETTA U.S.A.65490" with the left side marked with serial number: "GO-1386", indicating it was a fairly late issue pistol. The left and right sides of the slide (respectfully) have the standard factory markings of "U.S. 9mm M9-BERETTA U.S.A.-65490" followed by the Beretta factory, circled "PB" logo and "ASSY 9346442-65490" followed by the etched "PM" marking. The slide is fitted with the standard fixed white dot front and rear combat sights, and it has ambidextrous safety levers, ring hammer and lanyard loop on the heel of the frame. It is fitted with standard checkered, black plastic grips with the P. Beretta factory logo on each grip panel. Includes a plain shipping box, Bianchi holster, dual magazine pouch, two extra factory packaged magazines, and an extra M9 slide and left grip panel (both factory packaged). 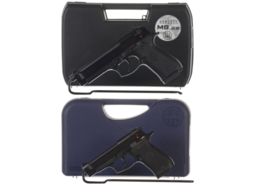 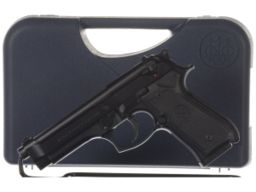 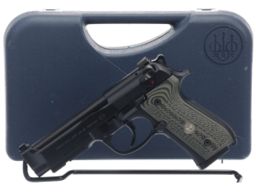 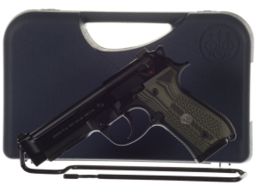 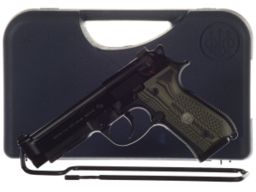 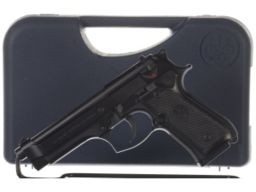