This is an extraordinary, historic Walther PPK presentation pistol with a rare NSDAP slide inscription. The Walther PP/PPK series pistols were introduced in 1929 and used by members of the German military throughout WWII. Among the rarest and most sought examples are the pistols with slide presentation engravings. This pistol is more scarce as it was obviously intended as a unique one of a kind presentation pistol. The left side of the slide (correctly matching) is hand engraved: "Kreistag Bad Reichenhall Der NSDAP 1937/"Dem Sieger"/(SIGNATURE)/Gauleiter des Traditionsgaues" A loose translation is that Adolf Wagner was the winner of the County Council Award in 1937 where he was named the Leader of the Traditional Gauleiters in the district of Bad Reichenhall by Berchtesgaden in Salzburg. Bad Reichenhall is a spa town and administrative center of the Berchtesgadener land district in Upper Bavaria, Germany. It is the traditional center of salt production, which is obtained by evaporating water saturated with salt from a brine pond. The area of Bad Reichenhall is located near Salzburg in a basin encircled by the Chiemgau Alps (including Mount Staufen (1,771 m) and Mount Zwiesel (1,781 m). The district is still actively engaged in this same practice. Wagner served in World War I as a German Army officer and was one of the early facists, having joined the Party in 1922. Together with Max Amann, a publishing giant; Franz Xavier Schwarz, the Treasurer of the party; and Hermann Esser who, among other things, was one of Hitler's earliest comrades in arms and co-founder of the party, Wagner belonged to the old Munich comrades of Hitler. In 1924, he became a member of the Bavarian diet. He was appointed a Gauleiter for various districts in Germany, eventually becoming Gauleiter of Gau München-Oberbayern. He was also Bavarian Minister of the Interior and of cultural affairs, reporting to Reichsstatthalter and Prime Minister Ludwig Siebert. Wagner also served as the master of ceremonies for the annual commemorations of the 1923 Beer Hall Putsch every 9 November in Munich. This scarce pistol is accompanied by a photocopy of three pictures of Adolf Wagner, one showing him sitting with Adolf Hitler at a party rally or the actual award ceremony. Wagner died in mid-1944 after suffering a heart attack earlier in 1943. Although Wagner is not well known in the U.S., he was known by absolutely everyone in the Munich area, both because of his high visibility job but even more so because he was such a radical facist. It is also important to know that the three "hotbeds" or "centers" of the party were Nuremberg, Berlin, and Hitler's "adopted" city of Munich; therefore Wagner was one of the three most important Gauleiters. The left side of the slide does not have the traditional slide markings because that is where the noted slide inscription is located. (this is a very rare factory feature!)The right side of the slide and barrel retains a "crown/N" proof and it is fitted with the standard fixed front and rear sights. The pistol has the correct mottled brown checkered one-piece wraparound plastic grips with a standard Walther marked magazine, which also has a matching light brown finger extension on the bottom of the magazine.

Excellent with 98% of the bright original blue finish overall with some light wear on the high spots on both front ends of the slide and a very small spot on the front edge of the trigger guard bow. The grips are in very fine condition with nice distinct checkering and markings overall with a small age crack, right in the middle of the upper area on the back side of the grip. A very historic German presentation Walther PPK pistol. 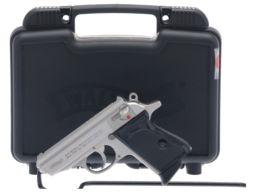 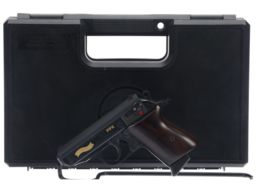 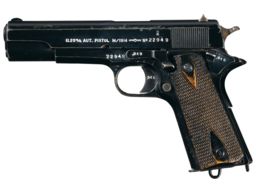 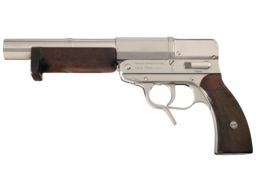 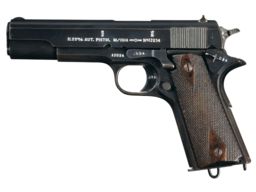 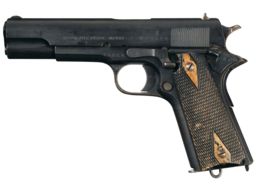