This is an extremely rare all original "Portuguese Contract" Mauser Luger pistol. This specific Luger is one of approximately 80 Luger pistols ordered in 1937 for Portuguese contracts. These rare Lugers generally fall into the Commercial Banner serial number range; however, they have several unique features that identify them as a Portuguese contract pistol. First, these models are a continuation of the early 1906/34 contract Lugers delivered in 1935 in that they still have the early style "1906" frame, the coil spring mainspring, 1906 style grip safety, no stock lug, and a hold open latch. Next, it is correctly marked "SEGURANCA" and "CARREGADA" respectively on the safety area and extractor, noted only on Portuguese contract Lugers, and it falls directly into the Portuguese contract serial number range noted above. It has the standard commercial model "Mauser Banner" logo on the toggle with a blank chamber area and it has fixed sights with military style serial number placement. It is correctly proofed with the small "crown/U" firing proof on the left side of the barrel extension. It comes with one nickel plated magazine with the aluminum base correctly numbered "4313v". A very scarce early military contract Luger that is rarely encountered in the U.S. today.

Excellent with 98% of the original blue finish overall with wear on the high spots. The small parts retain 95% of their bright straw colors overall. The grips are near very good condition with nice original checkering on both sides. However, both grips show numerous light pressure dents and dings on both sides, typically caused from being hit by the closure stud from a Luger holster. The pistol has all matching numbers including the magazine, except for the grips which are unnumbered. A superb example of a very scarce early pre-WWII Portuguese contract Luger pistol. 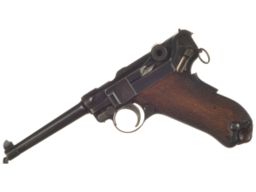 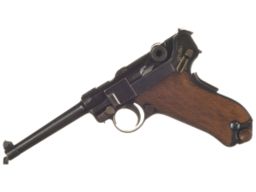 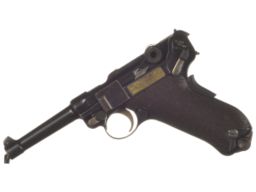 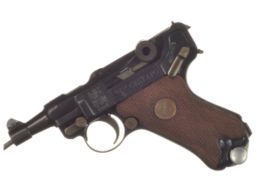 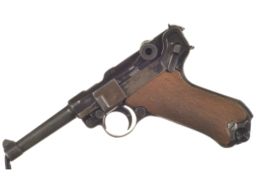 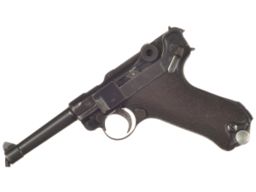