Developed in the early 20th century, the 1902 Bolo Bayonet was one of the U.S. Army's attempts at a hybrid weapon that could reduce the loadout an individual soldier had to carry into the field. Intended for use in jungle environments, the bolo could serve as both a bayonet and a brush clearing tool, as well as being able to serve as an entrenching tool in a pinch. Noted as making the Krag front-heavy when mounted, the 1902 was generally found to be both a good brush knife and a functional bayonet. While generally more liked than prior hybrid weapons, development was halted with the introduction of the 1903 Springfield, with its ill-fated integral rod bayonet; while interest was expressed in keeping the 1902 Bolo as a dedicated brush knife, the Army opted to retire it in favor of then-issued standard machetes. 14 5/8 inches overall, with a 10 inch blade dated "1902" on the left ricasso and marked "US" on the right. Standard Krag style bayonet hilt, with bright hardware and smooth grip panels. With a blued steel sheath with a ball tip and 100 degree swiveling steel belt loop. Provenance: The George Moller Collection

Fine overall. The blade has been lightly polished, with scattered shallow pitting concentrated on the left side of the blade, minor spotting, and some rounding of the tip. The hilt shows patches of brown patina and minor spotting, with some light dents and scuffs on the wood. The scabbard is also fine, with some patches of spotting and rust, about 60% of the blue finish, mild spotting and dings, and a streaked overcoating of protective varnish. 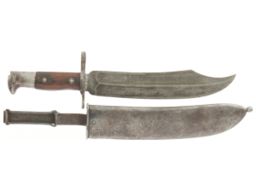 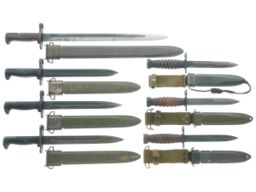 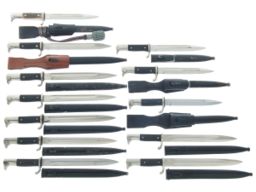 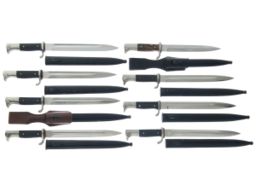 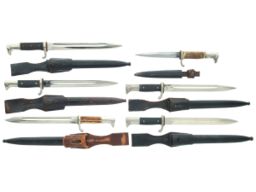 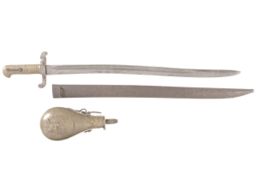