Lot 290: V. Funk & Sohne Side by Side Percussion Combination Gun

This mid-19th century sporting gun from the well-respected Funk family in Suhl has an interesting configuration. The left barrel has straight rifling for use with ball or shot while the right barrel has traditional rifling for more accurate shots with ball. Both bores measure approximately .58 caliber across the lands. The left barrel is fired using a plain trigger, and the right barrel is fired using an adjustable single set trigger. The rib has a bead style blade front sight, a notch rear sight with a second folding leaf, and "V. FUNK & SOHNE IN SUHL" inlaid in gold with a silver inlaid oval border and silver scroll accents. The rib on the breech and standing breech has inlaid gold and silver scroll and radiating line designs respectively, and the breech also has dual gold bands. The locks have "V. FUNK &. SOHNE" (right) and "IN SUHL." (left) inlaid in gold, bestial hammers with gold eyes and silver teeth, scroll engraving, scenes with a gold stag on the right and gold dog seizing a rabbit on the left, and pivoting hammer stalls. The tangs have scroll engraving. The ramrod pipes, wedge plates, and buttplate are German silver, and the wrist escutcheon is silver. The trigger guard is sculpted horn with checkering on the bow a scroll and shell design on the tail, and a separate ornate floral finial. The stock has a carved dogs head forend tip with contrasting inlaid eyes, scroll carving bordering the checkering on the forend and wrist, a raised relief carved scene of a dog getting caught on a tree while pursuing a boar behind the sculpted cheek rest, and a wood patch box lid with raised scroll carving at the front.

Fine with bright gold inlays, natural aged patina on the silver, light aged patina on the German silver, traces of original case colors on the locks, 70% plus of the period refinished brown remaining on the barrels, some light oxidation mainly on the upper tang, crisp engraving, and mild overall wear. The stock is fine and has general minor scratches and dings, mostly crisp checkering and carving, and minor loss at the breech. Mechanically fine. 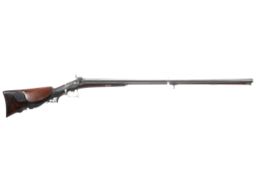 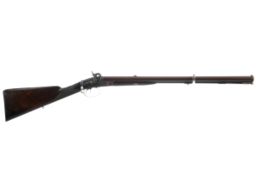 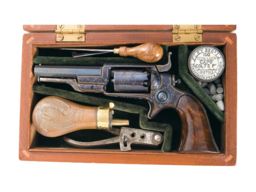 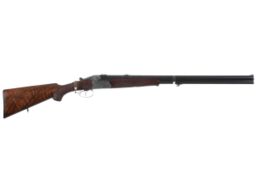 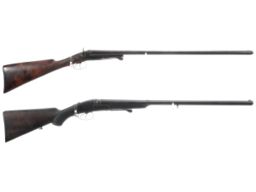 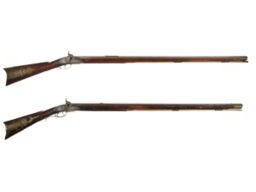