Conrad Kohrs (1835-1920) was born in Holstein in 1835, at the time part of the German Confederation but ruled by Denmark. Starting when he was 15 years old, he went to sea, initially working aboard merchant ships but over the course of the following 17 years working various other professions, including: butcher, meat salesman, logger on the Mississippi, and distiller. Those years of his life had Conrad travelling all over the world and the United States, often working with relatives in the meat industry, one of which owned a shop in Davenport, Iowa, just across the Mississippi river from us here at Rock Island Auction Company. In 1862, Conrad first travelled to Montana, first in search of gold and later selling meat to other miners. Not long after, he had amassed enough wealth to buy an established cattle ranch near Deer Lodge, Montana, from John Grant. Grant, who was originally from Canada, had initially begun his business in Montana through trading with settlers heading west, much of which was cattle. The standard practice of this trade was to trade one healthy cow to the travelers for two or more of their trail weary ones, which would then be fattened up on the pastures of Montana before being traded on to another group of settlers the following season. In 1866, with more and more English speakers making their way to and settling in Montana, the French-speaking Grant felt that he could no longer compete in the local business. In 1866 he sold his ranch to Koshers for $19,200 and headed back to Canada. Kohrs was back in Davenport, Iowa, in 1868, where he married the Holstein born Augusta Kruse. They returned to Montana together and built the Grant-Kohrs ranch into a Montana cattle powerhouse, covering 10 million acres and owning 50,000 head of cattle, 10,000 of which were shipped to the beef markets in Chicago every year. Conrad and Augusta built and sumptuously furnished a large house on the ranch, in which these napkin rings certainly wouldn't have been out of place, and it was around this time he started to become known as the "Cattle King" of Montana. Together, they survived the devastating winter of 1886-87, which ended many a hopeful cattle entrepreneur's dreams of riches. A large loan had helped the Kohrs ranch survive, and it was around then that they realized that open range ranching was a dying way of life. From that winter on there was a steady decline from open ranging towards a more modern ranching style like we see now. In 1902 Conrad and Augusta spent $30,000 to build a library in Deer Lodge as a memorial to their son, William Kohrs, one of their many legacies that remain today. In 1918 the Kohrs' celebrated their golden wedding anniversary in style, hosting a plethora of guests who gladly celebrated the Montana cattle pioneers. Many gifts are said to have been presented to the couple, with these napkin rings among them. According to the included certificate of authenticity, these gold napkin rings were gifted to the couple from the State Nursery (State Nursery & Seed Co.) in Helena, who had been heavily funded by Conrad Kohrs in their early days. An included handwritten note states that these rings were made from the only lump of gold ever received by the company for the purchase of seed. The solid gold rings themselves are approximately 2 inches in diameter with 1 1/8 inch wide bands. Each is engraved with the Kohrs' initials, "CK" and "AK", and both dated "1918". The center of each band has an attractive rough-hammered finish, with a smooth lip on the top and bottom. The inside of the bands of the "AK" and "CK" rings are respectively hand pennyweight marked "32DWT" (1.7 ounces/48 grams) and "33DWT" (1.8 ounces/51 grams). The pair are presented in an ornate picture box frame along with the note and certificate as well as a Bozeman, Montana area auction tag. Provenance: The John Fox Collection

Excellent, showing bright gold with very minimal wear and a few minor scratches inside the bands, likely from previous purity tests. The frame is fine with some mild handling and storage wear. These documented pieces of Montana frontier dinnerware are truly fit for a cattle king and queen! 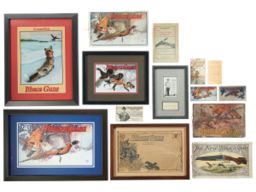 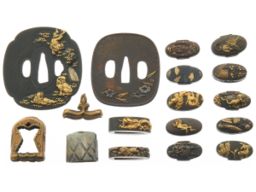 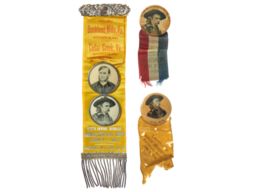 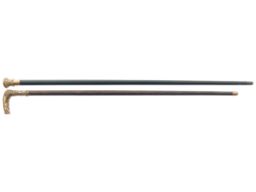 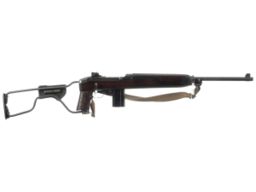 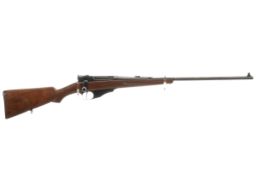