This martially inspected U.S. Colt Model 1861 Navy revolver was manufactured in 1862 as part of a 2,000 gun contract with the U.S. Ordnance Department, signed on April 13, 1861. Although the Ordnance Department subsequently purchased 363 additional Model 1861 Navy revolvers from Colt distributors, the 2,000 pistols purchased under the April 1861 contract were the only Ordnance inspected, military finished Model 1861 Navy revolvers manufactured by Colt during the Civil War. After the U.S. Contract Walker Colt revolvers, the U.S. Contract 1861 Navy revolvers are the rarest U.S. martial Colt percussion handguns. This revolver has the Colt military finish with low-polish blue barrel and cylinder, color casehardened loading lever, frame and hammer; natural brass trigger guard and back strap, and oil-finished, walnut grip. The barrel has a nickel-sliver front sight, and the hammer has a sight notch rear sight and knurled spur. The top of the barrel has "-ADDRESS COL. SAML COLT NEW-YORK U.S. AMERICA-." The cylinder has the classic Naval Battle of Campeche scene. "COLTS/PATENT" is stamped on the left side of the frame. It has the following inspection markings: "D" on the bottom of the barrel, "C" on the left side of the barrel at the breech, "R" on the face of the recoil shield, an "S" behind the trigger guard bow, and "L" on the left side of the barrel at the breech, top of the back strap, and butt of the grip as well as repeated twice on the cylinder and face of the barrel lug. The left side of the grip has a "PB" cartouche. Matching serial numbers are found on the barrel, arbor, cylinder, frame, trigger guard, back strap, and rear mortise of the grip ("955" properly hand-written). This example offers collectors of high condition Martial Revolvers or Colts a rare opportunity to fill a void in the martial collection at a high level.

Very fine, especially for a Civil War issued revolver, with 80% original case colors, 75% original blue finish, attractive aged patina on the grip frame, smooth brown patina on most of the balance, some spots of minor oxidation visible on the right side of the frame, and a variety of small dings and scratches typical of a military issued firearm. Strong cylinder scene. The grip is fine and has a distinct "PB" (Peter Barrett) cartouche, mild edge wear, some small dents mainly on the butt, and a discretely repaired chip at the toe. Mechanically fine. This is an incredibly rare Colt revolver and they are seldom found in this condition as evidenced by the record sale of an excellent example of this model (lot 1129) in our recent Premier Auction in September 2020, selling for a record setting $218,500. Of the original 2,000 purchased by the government, only a few are in this high of condition. 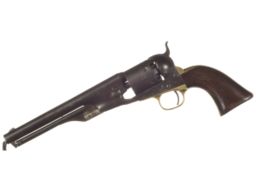 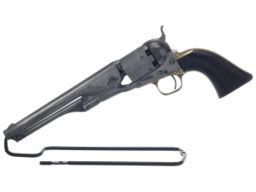 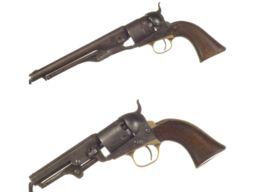 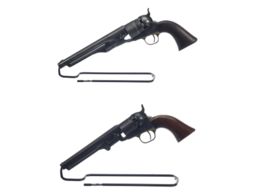 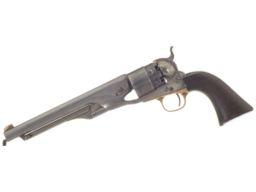 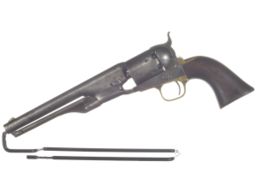