This rifle is pictured and discussed on page 437 of George Moller's "American Military Shoulder Arms, Volume III: Flintlock Alterations and Muzzleloading Percussion Shoulder Arms, 1840-1865." The muzzle is marked "US," "WSS" (Western Sharpshooters) and "1071" (rifle number) and Moller wrote, "These markings suggest the rifle may have been delivered after April 1862." The riflemaker is not known but was likely based in the St. Louis area and sold the rifle to Horace E. Dimick who supplied the unit and operated a large retail business in St. Louis where he sold rifles made by gunsmiths in his employ as well as those from outside sources. The barrel also has a dovetailed nickel-silver front sight, Lawrence patent notch and ladder rear sight (same sight would have been on the Berdan Sharpshooters' rifles), "US" on the upper left behind the rear sight, and inlaid German silver bands at the breech. The lock is unmarked and has a double line border. It is equipped with adjustable double set triggers. The forend cap, wedge escutcheons, star on the cheek rest, and blank oval on the bottom of the butt are German silver, and the spurred trigger guard, scroll style side plate, patch/cap box, buttplate, and toe plate are brass. The stock is finely figured curly maple and has a checkered wrist and nicely sculpted cheek rest. The Western Sharpshooters were known as Birge's First Sharpshooters early on before being redesignated in early 1862 as the Western Sharpshooters, 14th Regiment Missouri Infantry. They were later redesignated the 66th Illinois Volunteer Infantry (Western Sharpshooters) in late 1862 and then the 66th Illinois Veteran Volunteer Infantry Regiment (Western Sharpshooters) in early 1864. The unit was formed from men from various states in the Midwest. They were originally intended to be dressed as hunters to give them a distinctive look that matched their distinctive "deer" rifles, and it is said that recruits were required to prove they could shoot 3 inch groups at 200 yards with open sights. As Moller notes, they are the only regiment armed entirely with sporting arms. They fought against the Missouri guerrillas in Missouri initially and went on to fight in many of the war's most significant battles, particularly in the western theater in the first half of the war and then also in the eastern theater late in the war, including in Sherman's March to the Sea. They are among the most storied units of the war and Over 250 of the men of this unit later replaced their famous "deer rifles" with the latest state of the art Henry rifles at their own expense, and by the end of the war as few as 80 of these classic "deer rifles" remained with the regiment. Many no doubt saw very significant use during the war, and accounts of them using their Henry rifles clearly indicate they used those hard as well. Provenance: The George Moller Collection

Very good. The barrel has a mix of dark brown patina and applied artificial brown finish, moderate pitting concentrated more heavily at the breech, some filing at the edges of the muzzle, and the refinished tang has artificial brown. The lock is mostly brown with patches of minor pitting. The furniture displays aged patina. The pin for the rear of the trigger guard is absent. The stock is good and has some cracks and repairs including a splice between the bolster to just behind the wedge escutcheon on the right and the common tension crack on the left, some small chips and slivers absent from the edges, light scratches, very attractive flame patterns, light golden brown coloration, and crisp checkering. Mechanically fine. This is a classic St. Louis attributed half-stock percussion rifle with connections to one of the most famous units of the Civil War in the West. 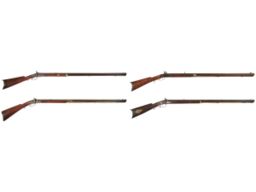 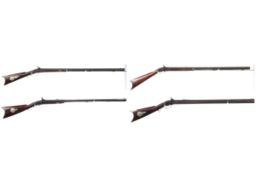 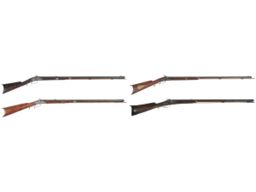 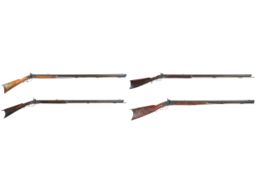 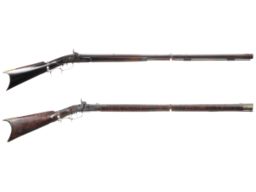 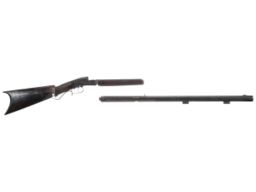