This is an attractive one-of-a-kind unserialized early Model 1873 Trapdoor rifle made to the highest order of workmanship by Springfield Armory on special order for a highly decorated combat veteran of various conflicts who held more high ranking titles than almost any individual in history, William Passmore Carlin (November 23, 1829-October 4, 1903). This rifle features attractive bordered floral scroll engraving on the barrel bands, lock, hammer, trigger guard, lower tang, breech block, top of the receiver, and on the attractive silver plated brass American long rifle curved buttplate. The buttplate tang is inscribed in fancy script "Col. W. P. Carlin". Included copies of period hand-written correspondence accompany this rifle in which a March 10th, 1875 dated letter addressed from William P. Carlin while stationed at Fort Abraham Lincoln to Chief of Ordnance Brigadier General Stephen V. Benét states, "General: I have the honor to request that you will cause to be manufactured at Springfield Armory, a Hunting Rifle, for me, which shall be of the new pattern issued to the Troops, Calibre .45 in, full stock of Maple, Silver fore sight, with all the implements for taking to pieces, cleaning, carrying & c. [illegible] with a belt for cartridges holding about 70 cartridges. Please have my name inscribed on the buttplate or counterplate." In another included copy of correspondence, a June 18, 1875 dated hand-written letter from Colonel James G. Benton states, "The following articles were sold and issued from this Armory, to Col. Carlin, on May 20/75... 1 Springfield Sporting Rifle Cal .45 $33.25, 1 Combination Screwdriver .17, Total Cost $33.40" William Passmore Carlin, a West Point graduate of 1850, spent the next ten years fighting the Plains Indians before the breakout of the Civil War. He was commissioned by the Governor of Illinois, Richard Yates, as Colonel and First Commander of the new 38th Illinois Infantry on August 5, 1861. In November 1861 he commanded the Southeastern Missouri District until early spring 1862 when he was assigned to command a brigade of infantry he led into the Siege of Corinth, Mississippi, in May 1862. He received multiple awards for bravery for leading a successful charge at the October 8, 1862 Battle of Perryville. On November 29, 1862, he was promoted to Brigadier General in the Union Army. In fall of 1863, he fought in the Battles for Chattanooga. In February 1864 he was engaged in the Atlanta campaign as major of the 16th U.S. Infantry. He was promoted to divisional command before the Battle of Jonesboro on September 1, 1864, received appointments to Major General in both the volunteer Union Army and the Regular Army at the end of the Civil War. From 1867-1868, he served as Assistant Commissioner of the Tennessee Freedman's Bureau, then returned to various commands and wore numerous hats and titles; relocating to different states every few months during Reconstruction, and frontier duty in the American Indian Wars. While stationed as Lieutenant Colonel of the 17th Infantry at Fort Abraham Lincoln in North Dakota, he was engaged in fending off multiple Indian attacks on the fort between October of 1872 to July of 1875. During his time stationed at Fort Abraham Lincoln he would have received this special order rifle on May 20th, 1875, as stated in the period letters of correspondence, which is a very strong indication this is the exact rifle he carried during the aforementioned Indian attacks! While on base, it was not uncommon for a rifle such as this to have also been used for hunting large game, including buffalo. He would continue his military service in command at Fort Wadsworth in Marshall County, South Dakota from July to October 1875, then as a member of the Retiring Board in Washington, D.C. from October 1875 to August 1876, then in command at Standing Rock Agency in North Dakota from August 1876 to August 1878, then in command at Fort Yates in North Dakota from May 1879 until 1881, and then at Columbus Barracks in Ohio until May 1882. In 1892, while in command of detachments of 4th, 14th, and 22nd Infantry, they were involved in containing the riots in the Coeur d'Alene mining region, in which striking miners attacked the mines and engaged in armed conflict with hired guards, during which a mill was dynamited. Martial law was declared and order was restored by state and federal troops. William Passmore would officially retire in 1893 as U.S. Army Brigadier General. Blade front and 1,100 yard ladder rear sight. "V/P/eagle head" proofs on the left of the breech end of the barrel. Marked "MODEL/1873/eagle/arrows/ U.S." marked high arch breechblock. Tuned two click tumbler lock and single set smooth trigger. Full length high grade maple stock with a checkered wrist and no proof marks or inspector cartouches. Equipped with ramrod, two barrel bands and sling swivels. "GDM" (George D. Moller) collection initials marked at the toe of the stock. Includes leather sling marked "C.S. STORM/MAKER/NEW YORK CITY", US socket bayonet, scabbard, US leather frog, and wood tampion. Provenance: The George Moller Collection

Very good, retaining traces of original blue finish with the barrel turned to a smooth brown patina, some patches of mild pitting on the bands and hammer, and crisp engraving throughout. More than half of the period applied silver finish remaining on the buttplate and appears to retain traces of silver finish on the lock, receiver and breech block. Stock is very fine with highly attractive stripes, a few light scratches, filled in section on the left, minor chip behind the lower tang, a small hairline crack at the lower right of the buttplate, and sharp wrist checkering. Mechanically excellent. Included bayonet is excellent, scabbard and frog are both very fine. A stunning Trapdoor rifle specially crafted for an important decorated figure in U.S. Military history, William Passmore Carlin. 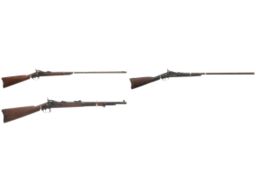 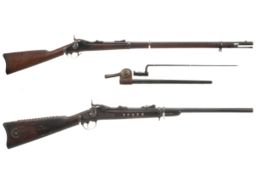 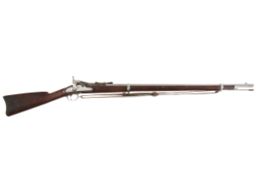 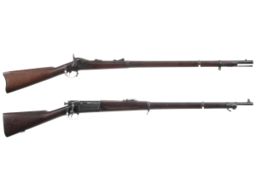 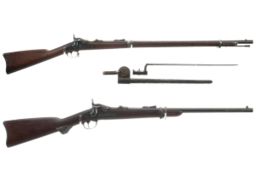 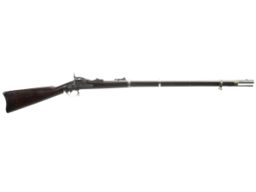