John Waters is listed on page 56 of "English Gunmakers: The Birmingham and Provincial Gun Trade in the 18th and 19th Century" by Bailey and Nie as active 1766-1788 and "Granted British Patent No. 1284 of 9 Mar. 1781 for attaching bayonets to pistols; is generally credited with the invention of the 'spring bayonet.'" The pistol has "Patent/ No. 795" on the left side of the action indicating this is the 795th gun he produced with his spring bayonet, "Waters & Co." on the right side, cross scepter proofs on the bottom of the barrel, "THO GILL" marked on the underside of the folding bayonet, sliding half-cock safety, a second sliding trigger that releases the bayonet which has a drum shaped attachment mechanism rather than the more simplified spring mechanisms used on later "snap bayonet" guns, side mounted ramrod, and a walnut grip. The muzzle flares to 1 inch, but the bore is smaller and measures at .50 caliber. Provenance: The Richard P. Mellon Collection

Very good with pleasing bright patina on the brass, mottled gray and brown patina with light pitting on the iron, and mostly crisp markings. Grip is fine with defined edges, and some scattered light scratches and dings. Mechanically fine with a functional spring-loaded bayonet. 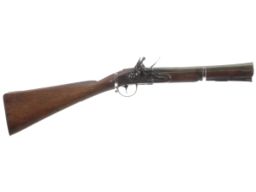 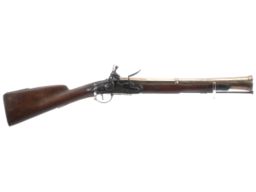 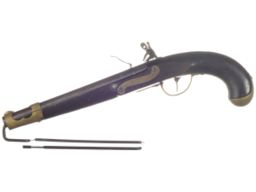 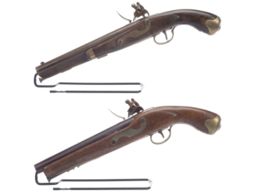 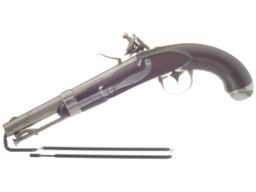 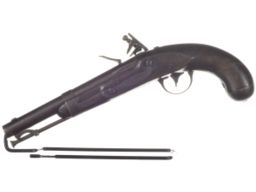