Manufactured 1929, this pistol is attributed to the notorious member of the Chicago Outfit Frank Nitti (Nitto). Nitti was the first cousin of Al "Scarface" Capone as well as one of his most trusted associates. When Capone was imprisoned in 1929, Nitti was appointed as one of the triumvirate which took over control of the Chicago Outfit. In 1932, Nitti was shot three times in his Chicago office by Detective Harry Lang, who also shot himself in the arm and claimed self defense. Nitti miraculously survived, and Lang was later convicted of assault with a deadly weapon. During the court case, information came to light that linked the mayor of Chicago, Anton Cermak, to paying Lang to kill Nitti. Two months later, Cermak was shot and killed in what many believed was a failed assassination attempt on Franklin D. Roosevelt, who Cermak was standing next to at the time. Many still believe, however, that this was a revenge murder for the attempt on Nitti's life. In 1943, Nitti was indicted for extorting the Hollywood film industry and, rather than face another prison sentence, killed himself before the trial. The pistol itself has mostly standard markings and features of a Colt Model 1908 Pocket Hammerless and is fitted with a pair of smooth pearl grips. The back strap of the pistol appears to have been faintly etched with "FRANK NITTI" and a spacer inside the right grip is marked "N.F." A certificate is behind glass inside the lid of the included case which states that this pistol was previously owned by Nitti (listed by serial number) and that is was on loan to the New Jersey Museum of Crime and Punishment from the collection of the Cook County, Illinois Sheriff's Department. The certificate has four stamped seals at the bottom which appear to be from various state agencies as well as three unidentified signatures. Provenance: The Dr. Robert Azar Collection

Fine, retains 95% plus of the reapplied nickel plating with some minor patches of moisture type staining and a few patches of light pitting visible under the finish. The grips are very fine with minimal handling marks. Mechanically excellent. The display case is fine with some scattered minor handling/storage marks and a minor crack in the lid. 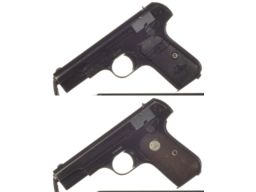 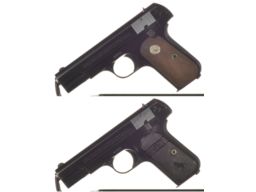 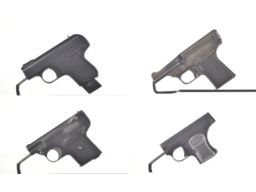 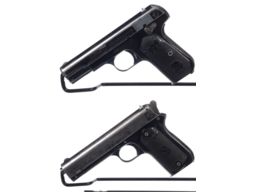 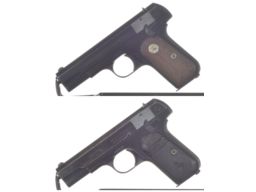 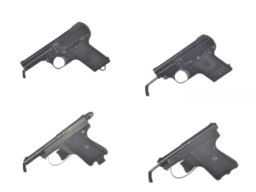