This is a unique example of an early gas-operated semi-automatic prototype rifle built using what was originally a late 1915 dated Springfield Armory Model 1903 bolt action rifle. The U.S. Ordnance Department had expressed an interest in adopting a suitable semi-automatic small arm capable of handling a high power cartridge in military service from the day the Model 1903 bolt action was put into service. The advantages of a semi-automatic rifle were seen in the ability to increase the odds of a soldier effectively landing a follow up shot at distance rather than having to manually rack the bolt back between every shot, which creates movement and in turn loses the line of sight; a recurring problem that would be experienced by soldiers in World War I when trying to follow up a shot on a barely visible enemy helmet peeking over the trench line a few hundred yards away. Many inventors came forth with different semi-automatic rifle systems to the Ordnance Department in the early 1900s before the later official adoption of what became the M1 Garand. Some of which were intended as possible means of converting the standard Model 1903 rifle in which the U.S. Government would entertain selling rifles to inventors for said purpose, with many promptly rejected due to reliability issues including breakage and concerns with the ability to attach a bayonet. The consideration of high powered semi-automatic rifle development by the Ordnance Department was briefly halted during U.S. involvement in World War I, with attention turned towards the war effort. This unidentified example wearing a late 1915 dated barrel appears to have been developed right around the time of U.S. entry into the war, which may explain in part why the inventor has not been positively identified. Two gas vent holes are visible underneath the barrel towards the muzzle. Upon disassembly, it can be determined a gas tube and spring would have been mounted below the barrel but are now absent, and an empty cavity is visible inside the stock channel. The right side mounted charging handle stays fixed during semi-automatic fire but is used for manual operation of the bolt for loading via stripper clip. The Model 1903 bolt has its handle modified to now work as a cam that rotates inside the track of the top mounted cover. The top mounted cover acts as an operating rod in that it rides in rails on either side of the stock and is moved under gas pressure in order to operate the bolt, returning back to closed position via spring pressure (spring absent). Standard M1903 blade front sight with hood and ladder rear sight with 2,850 yard notch, "SA/flaming bomb/12-15" marked on the end of the standard 1903 barrel, receiver ring still retains the original Springfield Armory markings, serrated trigger, and standard trigger housing. The modified stock is fitted with a standard M1903 hand guard, barrel bands, and checkered buttplate with compartment. Includes a 1917 dated Rock Island Arsenal M1907 leather sling. This rifle shares slight visual similarities with later made examples of Snabb semi-automatic rifles, designed by Swedish inventor Harry Erik Rehnberg and built using various types of bolt action rifles. Information and similar examples of early high power semi-automatic rifles based on the Model 1903 are pictured in the book "The Gas Trap Garand" by Billy Pyle on pages 1-14, in which inventors are mentioned including the rifles submitted and tested by Samuel N. McClean, John L. Murphy, Daniel J. Manning, John Thompson, Wilford J. Hawkins, William D. Condit, Franklin K. Young, Grant Hammond, John C. Stergian, Creedy C. Sheppard, and Søren Hansen Bang.

Fine, retains half of the original blue finish with some flaking and gray patina on the balance. Stock is fine with some light scratches and dents and a crack visible above the right of the bolt cover track. Mechanically fair, absent gas system and spring. A very interesting and unique experimental conversion of a U.S. Springfield Model 1903 Rifle. 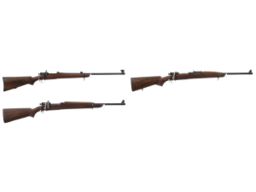 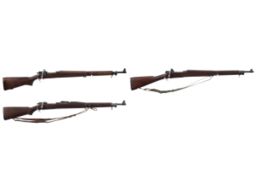 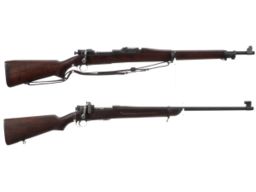 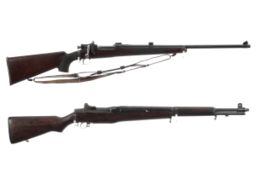 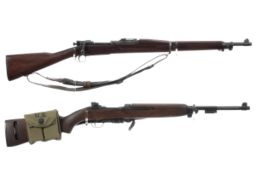 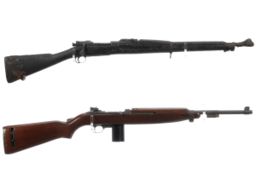