Manufactured in 1914, this early Colt Government Model pistol was ordered by the Rhode Island National Guard along with 11 other Government Model pistols, all of which were shipped on 17 September 1914. This shipment is listed on p. 256-257 of "The Government Models: The Development of the Colt Model of 1911" by Goddard. Though not in the traditional sense, this pistol could be considered what is often termed a "commercial issue", or a commercially manufactured Government Model that was privately purchased by or presented to someone in the military. These Government Model pistols were the cutting edge of firearms technology at the time and it is clear that both civilian and military personnel alike couldn't wait to get their hands on it. This specific pistol is interesting in that it was won by a military officer, rather than being purchased. This is evidenced by the non-factory applied inscription on the right of the slide that reads "CHAMPIONSHIP 1916/R.I.N.G./WON BY/1st LIEUT. GUY G. ALLEN/13th CO. C.A.C." Though no further information on Lieutenant Allen could be found at this time, it appears that he was a member of the 13th Company of the Coastal Artillery Corps, and likely was an excellent marksman. Apart from the inscription, the left side of the slide has the standard two-line, two-block patent dates and address with the Rampant Colt behind the serrations, while the caliber markings are on the right. The right side of the frame is marked "GOVERNMENT MODEL" over the serial number, and the left side of the trigger guard is marked "VP" and "R". The replacement military brushed blue barrel is marked with a conjoined "HP" on the chamber. The pistol has standard features and is furnished with an unmarked replacement two-tone magazine. Includes an unmarked leather holster similar in pattern to the U.S. Model 1912. The included factory letter confirms the current configuration (grips not listed) and shipping information outlined above. Provenance: The Gus Cargile Collection

Fine, retains 70% of the original blue finish with the balance mostly a smooth grey patina, primarily on high spots and the grip areas. The grips are very good with some scattered light handling marks and crisp checkering. Mechanically excellent. The holster is fine with some mild wear and some mild oxidation on the iron fittings. 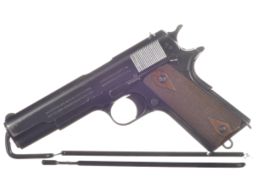 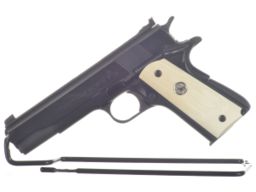 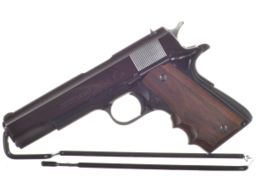 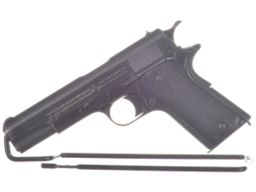 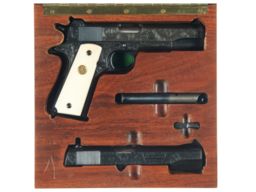 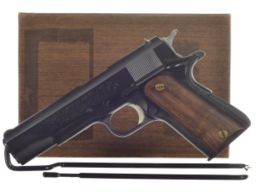