This Model 1903 rifle in "Rod Bayonet" configuration was manufactured by Springfield Armory c. 1905. The rifle is accompanied by a "Statement of Fact" dated 1993 and signed by Ken Noble which states this rifle was found by Arthur Noble near Miles City, Montana, "shortly after the turn of the century". The letter further states that the Army allowed Noble to keep the rifle and that it remained in the Noble family until 1993. The letter states that Ken Noble contacted Springfield Research Service (SRS) and that SRS stated this rifle was not on the list of Rod Bayonet rifles that were released by the Ordnance Department prior to the 1905 conversion to accept a knife bayonet and that, in the opinion of SRS, this is a "legitimate pre-conversion rifle". No SRS correspondence is included with this rifle. The limited information available on issue of Rod Bayonet rifles does not indicate any Army units other than the Alaska and Philippines garrisons and the West Point cadets received Rod Bayonet M1903 Rifles prior to 1905 decision to withdraw Rod Bayonet riles from service. This rifle is in the correct Rod Bayonet configuration and retains the original barreled receiver. The barrel has the distinctive Rod Bayonet front sight, lacks date or armory markings and is the correct length (24.206"). The barrel has the correct two band rear sight base with distinctive, Krag style, tangent rear sight. The base spline is milled flush with the base and retains the original blue finish which indicates that the base has not been removed from the barrel. The bright finished bolt has the correct niter blue extractor and second style safety lock installed on Rod Bayonet rifles in this serial number range. The bolt is stamped "S" on the bottom of the safety lug. The safety lock is blued, the cocking piece and safety lock are casehardened, and the "SAFE" and "READY" markings use serif letters. The rifle has the early smooth trigger. The rifle will fire when the trigger is pushed forward. The trigger guard lacks the pin installed after 1905 to eliminate forward movement of the trigger. The stock is the correct, unaltered, Rod Bayonet configuration with no reinforcing bolts. The rifle has the correct solid rear barrel band, special Rod Bayonet front barrel band, special stacking swivel, Rod Bayonet stud and catch and unique ramrod bayonet. The handguard is original and is attached to the barrel by a spring clip retained by two-flush fitted rivets. The receiver, "OFF" side of the magazine cut-off lever, safety and cocking piece are casehardened, and the other components are blued. The stock and handguard are oil-finished walnut. The receiver is roll-stamped: "U.S./SPRINGFIELD ARMORY/MODEL 1903" using the early small serif characters above the serial number which is in serif numerals. The rifle lacks the correct square end magazine follower has a later replacement, post 1905 follower with rounded end. The smooth buttplate has the large diameter trapdoor. The inside of the trapdoor lacks the assembly numbers found on the earlier, Krag style, butt traps used on many Rod Bayonet rifles. The stock lacks the dated, script final inspection mark and encircled, script, "P' proof mark that were stamped on all completed M1903 rifles before they were released from Springfield Armory. Only a limited number of Rod Bayonet M1903 rifles were issued to U.S. Army units in Alaska, the Philippines and the cadets at West Point before production was halted on January 11, 1905, to redesign the rifle to accept a knife bayonet. Nearly all of the Rod Bayonet M1903 rifles manufactured by Springfield Armory in 1903 and 1904 remained in storage until they were altered to 1905 configuration. A few (probably less than 100) M1903 Rod Bayonet rifles were provided to state governors, National Guard senior officers, cartridge companies and foreign governments. These rifles represent most of the surviving M1903 Rod bayonet rifles in original configuration. The serial numbers of most of these special issue rifles were available to SRS.

Very good plus with 25% of original blue finish, mostly on the rear sight base and visible portion of barrel and front sight. The rifle retains most of the scarce M1903 Rod Bayonet components; the barrel and receiver appear to be original and un-altered. The revarnished stock and forearm show moderate handling wear but lacks all markings. The buttplate and magazine follower are later production replacements. The rifle retains the original Rod Bayonet front sight cover, a russet leather M1904 Sling and nickel-plated oiler. Model 1903 Rod Bayonet rifles are rare in any condition. This rifle retains the majority of the scarce Rod Bayonet components and is a very good example of one of the rarest U.S. military rifles. It would be a great addition to any collection of U.S. martial arms. 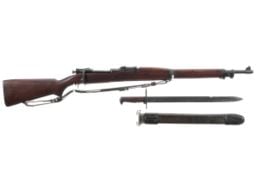 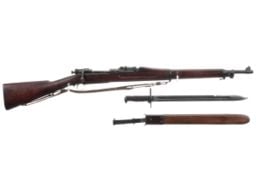 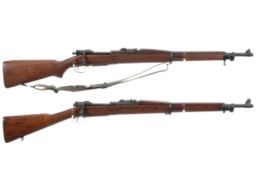 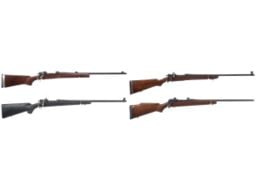 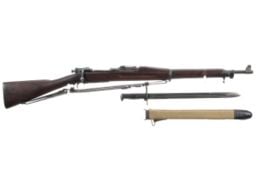 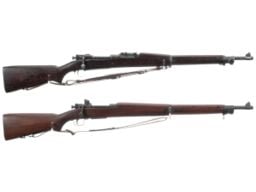