One of only 50 produced, all in the 22401-22450 serial number range, this is a representative example of a Model 1902 DWM Luger that has been fitted with the "Powell Indicating Device", commonly called a "Cartridge Counter" on the left side of the grip. Produced on order from the U.S. Board of Ordnance circa 1902-1903, the Cartridge Counter Luger is nearly identical to the Model 1900 Test Luger, with the addition of the Powell Device, which consisted of a magazine configured to have a cutout and guide screw extending through the left side and a 3 1/4 inch long slot in the left grip, aligned to match the magazine, with a guide numbered one through seven and a celluloid window to protect the internals. The screw, connected to the magazine follower, rests at the "7" position when loaded, advancing upward with the follower as rounds are discharged, permitting the soldier to determine his remaining rounds by merely looking at the grip; this addresses one of the complaints levelled at early automatic pistols, since a revolver user could easily visually verify if their weapon was loaded by just looking at the cylinder. With this upgrade, the 1902 Lugers were issued to the Cavalry and Light Artillery Boards at Ft. Riley, Kansas, on April 19, 1904 for field testing. Issuing their final report on July 4, 1904, the Cavalry Board recommended that these Lugers not be adopted for service. While a fine handgun, the Luger had a major point against it in the form of a rising bias in the American military establishment against handgun rounds smaller than .45 caliber, due to a belief that smaller rounds lack "shock effect" and "stopping power" based on reports from the Philippines and elsewhere of multiple center-mass shots from the then-issued .38 caliber revolvers failing to stop approaching enemies. Because of this rejection, a new set of trials would be called in 1905, which eventually led to the development and adoption of the U.S. 1911 pistol. Blade front and notch rear sights, with the "fat barrel" profile, American Eagle on the chamber, recessed breech bolt, dished toggles with the toggle lock on the right side, as produced during this time frame, and "DWM" on the toggle link. High polish rust blue finish overall, with straw colored lock bolt, trigger, magazine release ejector, extractor, toggle lock and safety lever which is polished bright under the "safety position". The grip screws and pins have a niter blue finish. The pistols have a grip safety with the first model thumb safety lever. Matching full numbers on the barrel and frame, with partial, renumbered to match, numbers on the latch, side plate, trigger, toggle links, extension, breechblock and grips. As noted previously, the left grip panel and magazine are fitted with the Powell Indicating Device, the latter also nickel finished with a nickel disk accented hardwood base. Provenance: The George Moller Collection

Very fine as assembled (see above), with 80% of the restored blue finish, showing some bright wear and scuffing on the left side of the frame, wear and a brown patina on the front strap, bright edge and scattered mild handling wear. 30% of the bright straw color is present, concentrated in the protected areas with a gray patina on the remainder. The replacement grips are in very good condition, with mild dings and dents. The celluloid panel has slightly yellowed and shrunk slightly, but is still firmly installed in the cutout, and the numbers show some stains and wear but remain clear and legible. Mechanically excellent. 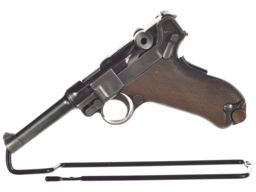 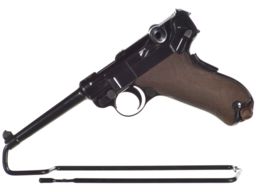 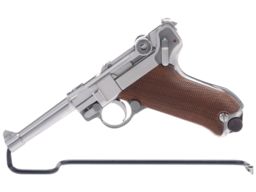 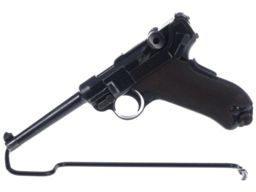 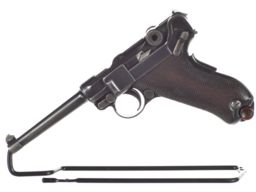 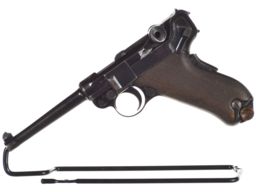