Starting in September of 1920, the Ordnance Board began to make suggestions for modifications to the Model 1911 pistol based on experience from World War I, and by April of 1923 OCM Item 2890 was standardized and recommended by the department. A pilot series of 10,000 pistols was approved with some production issues arising throughout 1923, but by January 1924 the first "Improved Models" were being delivered and were also known as the Transitional Model 1911s. This example was shipped on 25 July 1924 to Springfield Armory. While they retained the nomenclature markings of the 1911, they were equipped with the signature features of the 1911A1 which included the dished frame sides, shortened trigger, elongated grip safety, and arched mainspring housing. Fitted with round blade front and flat top notch rear sights, with the two-line, two-block address and patent markings divided by the Rampant Colt logo on the left side of the replacement slide, "MODEL OF 1911.U.S.ARMY" on the right, and "H" above the firing pin stop plate. The frame bears the circular Walter Gordon "WTG" inspection stamp, with the short milled checkered trigger, wide checkered hammer, long grip safety, checkered mainspring housing with lanyard loop, full blue replacement barrel with "P" on the lug, a full blue "S" magazine, and fitted with a later replacement pair of reinforced grips.

Very fine, retains 80% of the original blue finish with the balance having thinned to a mostly smooth grey patina, primarily on edges and the grip straps, and a small patch of very light surface pitting on the left of the replacement slide. The custom recoil spring, plug, and guide are modern replacements, the latter with a full length guide rod. The replacement grips are excellent with only the slightest handling marks and crisp checkering. Mechanically excellent. 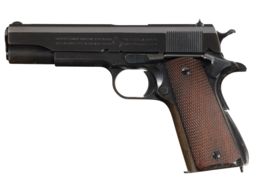 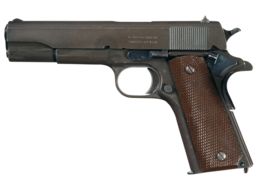 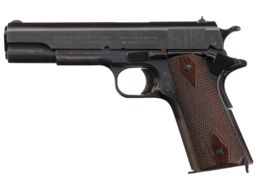 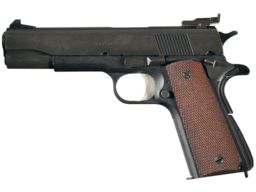 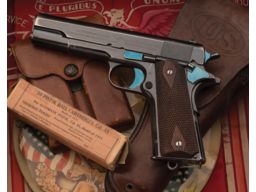 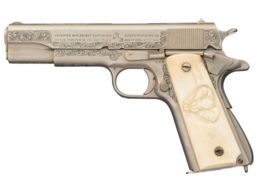