Originally manufactured in 1982 by Heckler & Koch as a semi-automatic rifle, two rounds of upgrades were performed by American firms, namely TSC Machine (belt feed conversion) and Fleming Firearms (registration of receiver as machine gun and installation of shelf-compatible trigger pack) turning it into an extremely compact belt fed selective fire weapon. Hooded post front and 4-position drum rear sights, the former highlighted with pink enamel for improved visibility, with a ported flash higher, Knight's Armament triple-rail forearm, textured pistol grip and a shortened "club foot" buttstock. A folding bipod, a Knight's foregrip and two Knight's rail covers are installed on the forearm. The TSC markings are present on the front of the receiver, with the Fleming markings on the right side of the frame, concealed by the trigger group. The bolt carrier is dated "6/60" with a pink enamel dot to indicate the fully locked position and proper slotting to interface with the feed hardware, and the bolt head is dated "9/74". The trigger pack is the ambidextrous style, with pictograph markings for safe, semi-automatic, 3-round burst, and full automatic. Included with the lot is one large metal belt carrier can, four small round plastic belt carriers, assorted small parts, a length of non-disintegrating metal belt, assorted small parts, a YHM 45 degree rail extension, and a telescoping buttstock.

Very fine, with 98% of the factory pattern black finish, showing some light handling marks and edge wear overall. The forearm is loose at the rear, otherwise the furniture is equally very fine. Mechanically excellent. NOTE: This weapon is a National Firearms Act (NFA), fully transferable Class 3, which is registered with the Bureau of Alcohol, Tobacco, Firearms and Explosives, (BATFE) under the provisions of 18 U.S.C. Chapter 44 and 27 CFR part 478. 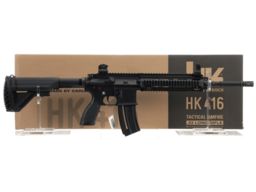 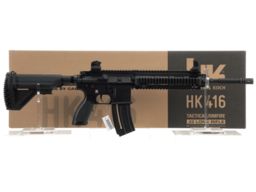 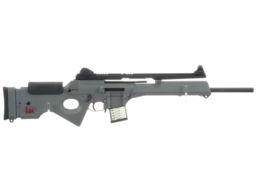 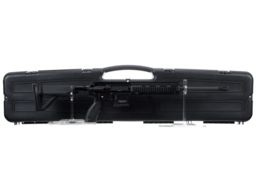 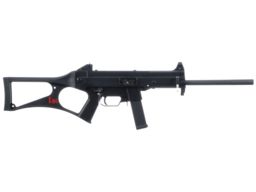 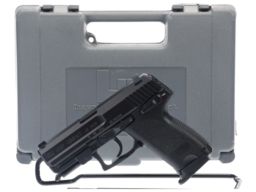