Produced in very limited quantities at the tail end of the war, the "North China Type 19" was an attempt to make a streamlined substitute for the Type 14 Nambu pistol for Japan's occupation forces in China. There were a number of factors underpinning this decision; the occupation was in constant need of fresh weapons to deal with the Nationalist and Communist Chinese forces, resources from the Home Islands were tight due to the pressure applied by the Allied "island hopping" campaign, and any shipment of supplies was in danger from air or submarine attack. Chinese industry was used to arm auxiliary units, and using it to arm main-line troops was a logical next step. Believed to have been made in or around either Beijing or Shanghai, the Type 19 closely follows the basic mechanism and general shape/ergonomics of the Type 14, though with a number of changes. The safety has been relocated and redesigned, being a simple thumb lever towards the rear; in addition to being easier to make, this safety is easier to operate with the shooting hand, a complaint expressed in some quarters against the Type 14. The trigger guard is a solid, integral frame component, and does not need to be manipulated to disassemble the pistol, with a spring-retained lever on the front right serving to secure the upper assembly to the frame. The barrel and bolt assembly are very close to the Type 14, as is the magazine, though there is no provision for a magazine well safety or a retention spring. Blade and notch sights, with the one-line Japanese nomenclature on the left side over a concentric circle stamp and the number "22", with a different number "21" appearing on multiple components, including the bolt, locking block, frame interior and magazine. The grips are ribbed hardwood. Quantities of this pistol on the American market are extremely limited; as they were made in China for use in China, few made it elsewhere in the Pacific Theater where a trophy-hunting GI would have the chance to claim one from a downed enemy or a cache of surrendered arms, versus the wave of Type 14s, 94s, 99s and swords that came home when demobilization began. Per Harry Derby in "The Hand Cannons of Imperial Japan" (page 202), "possibly 50" of these handguns were manufactured and this example is one of only 4 known (5 reported).

Very fine, with 80% of the original blue finish, showing patches of rust on the rear of the frame and in scattered spots elsewhere, bright edge wear, and scattered handling marks. The otherwise fine grips show some light dents and scuffs, along with a few small chips in the edges and serrations. Mechanically fine. 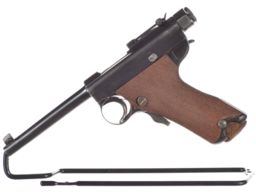 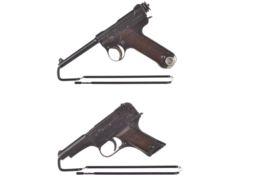 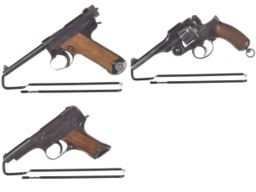 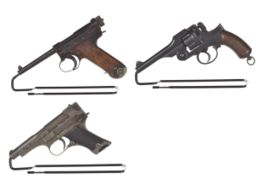 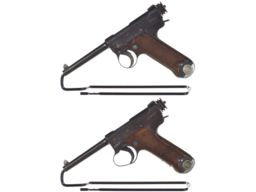 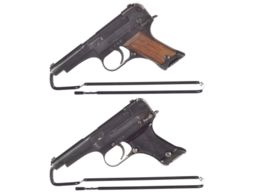