This large frame Lever Action Navy Pistol was manufactured by the Volcanic Repeating Arms Company c. 1855-1856. The pistol has a octagon barrel with integral eight-shot magazine. The Type I (full rib) barrel has a German silver cone front sight and steel, clam shell shaped follower. The top barrel flat is roll-stamped with the three-line legend: "THE VOLCANIC/REPEATING ARMS CO./PATENT NEWHAVEN CONN. FEB. 14, 1854." The undecorated brass receiver has semi-circular cut-outs at the front and rear of the ejection port, a dovetail mounted rear sight and distinctive loading lever with finger hole. The bolt has a single hook extractor. The hammer spur is hand-knurled. The serial number is stamped: (1) on the right side of the loading lever, (2) right side of the frame beneath the grips and (3) on the inside of both grips. All of the visible serial numbers match. A "1" inspection mark is stamped on the left side of the loading lever and on the left side of the frame beneath the grip. The barrel and integral magazine have a bright blue finish. The bolt, rear sight, cartridge elevator and trigger spring are fire blue. The hammer is color casehardened. The two-piece walnut grips have a high gloss varnish finish. The Volcanic Repeating Arms Company manufactured an estimated 1,500 Lever Action Navy Pistols with eight-inch barrels in 1855-1856. A document that accompanies the pistol states that it was originally owned by Henry Lischer (1828-1903) and was passed down through his family. Lischer served in the Mexican-American War from April to August 1848. He served in the Missouri Mounted Dragoons. During the Civil War, Lischer served as a captain in the 3rd Regiment, U.S. Reserve Corps, Missouri Infantry at the St. Louis Arsenal from May through August 1861. The Lischer family history states that Capt. Lischer carried this Volcanic pistol during his Civil War service. Various Rock Island and Davenport newspaper articles from his lifetime and at the time of his death provide important life details. He was born in Bavaria on July 10, 1828, and came to the U.S. in 1835. In 1840, he first began his newspaper career at the St. Louis Republican. He then apprenticed with the Anzieger des Westens (Gazette of the West). In 1846, he enlisted in the Missouri Mounted Dragoons for the Mexican-American War and returned to the newspaper which he became foreman of in 1851. He was one of the men who purchased the Der Demokrat of Davenport, Iowa, in April 1856. At the beginning of the Civil War, he returned to St. Louis where he was one of the owners of the Westliche Post and served in the home guard before returning to Davenport to take over the Der Demokrat in 1861. He was the proprietor of the paper until his death in 1903 and was active in its management until 1881 and president of H. Lischer Printing Co. After his retirement, his sons took over. Though a "Democratic" paper in name, the paper was a "free paper" supported the Republican Party on many issues, particular in opposing slavery. He was also involved in local banking, most influentially as the president and a director of the German Savings Bank in Davenport. He died suddenly following a stroke in 1903. Local newspapers reported that his funeral was heavily attended, particularly by the area's German-American residents. Der Demokrat continued on until September 1918 when it closed due to the anti-German sentiments aroused by the First World War.

Very fine. This pistol remains in exceptional condition with 85% of the bright blue finish on the barrel/magazine. The brass receiver is very good with tight side plate joints and minimal handling wear. The receiver has a few tiny scratches on the left side around the lever and hammer screws and several shallow dents on the top flat ahead of the rear sight. The receiver has a very attractive, untouched, patina. The bolt, rear sight, cartridge elevator, hammer and lever have a smooth brown patina. The grips remain in very fine condition with 85% of the original varnish and scattered, minor, handling marks. The top of the T-bar spring at the end of the magazine is broken. This is an exceptional example of a scarce Volcanic Repeating Arms Company Lever Action Navy Pistol with American history. 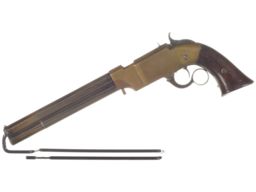 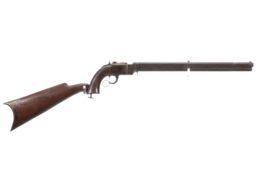 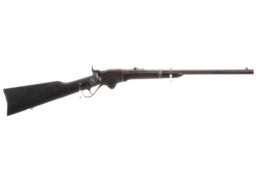 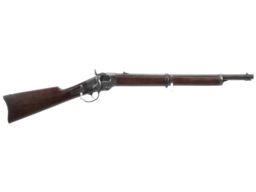 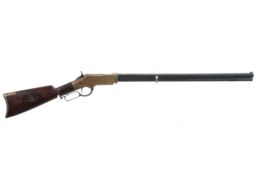 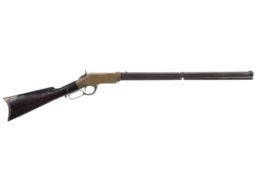